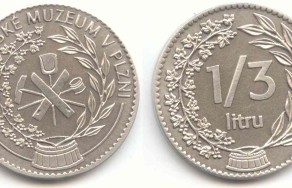 „People respond well to traditions, and in bringing the exchange custom – where brewers could get 3 liters of beer for their coins – back to life, we have prepared a unique experience of beer–brewing history for visitors of the Museum and of the Underground. You cannot get an allotment of beer anywhere else, and that is why it is such a great success,“ said Martin Buchlovský of the Beer Brewing Museum.

Metal beer coins mainly served as specially designated currency in Czech breweries. At the break of the 19th and 20th century, employees got their employees’ or „deputized“ beer in exchange for them. Some of the coins survived until the end of the century.

Since the Fall of 2006, the tradition of beer coins has been coming to life again thanks to Plzeňský Prazdroj and Beer Brewing Museum in Plzeň. They are issued in aluminum, brass, copper, and silver form. The aluminum ones are available exclusively as a part of the entrance to Beer Brewing Museum or to Plzeň Historic Underground, and so they are in the  highest demand. 32,600 of them were issued in 2006, and three years later it was necessary to issue an additional edition of 7,000 coins. Copper, brass, and silver coins are available to tourists and collectors for purchase in the gift shop at the brewery’s courtyard  or in the museum. Half of the visitors will eventually exchange their coins for beer. The rest will keep them as souvenirs.

Plzeňský Prazdroj Brewery, as the last brewery in central Europe that preserves and further supports the art of cooperage, successfully brings to life yet another unique beer–brewing tradition.

*With the purchase of the ticket, every adult visitor of Beer Brewing Museum automatically receives an aluminum beer coin marked with the inscription „Beer Brewing Museum“ good for 0.3 liter of Pilsner Urquell beer. Every adult visitor of Plzeň Historic Underground will receive a coin good for 0.2 liter of a special beer Master, also in aluminum form. People may then exchange their beer coins for a given amount of a given beer in one of the selected Plzeň pubs, or save them as souvenirs.

More about the Beer Brewing Museum
Beer Brewing Museum in Plzeň is the oldest of its kind in the world and the only such specialized workstation in the Czech Republic. The museum documents the story of beer since its beginnings, from antiquity to the rise of gigantic, industrial breweries. The museum is located in the original house with the rights of beer brewing. It includes, for example, a Gothic malt–house, a forest, and two–level lager cellars with ice rooms that lead into the underground. Besides that, you can find there a unique, functional model of a beer brewery, or a collection of bottles and tankards. Next to the museum there is the tavern „Na Parkánu.“