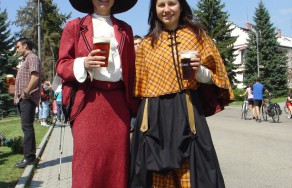 The walk across the country of Baron Ringhoffer starts on April 28, at 9:30 am at the Mirošovice train station. The participants will go from Mirošovice to Velké Popovice where they can take a tour of the brewery and enjoy Kozel 11° beer from the tank. They will also have a  chance to appreciate the honest work and traditional craft behind the beer-making process. There is a best-costume competition for those who make the journey dressed in period clothing from the Austrian–Hungarian era. Kozel will also reward all who come to the end of the trip in Kamenice by 5:00 pm. There will be a traditional christening of baby goats, this year’s offspring of billy goat Olda, the brewery’s mascot.

The walk goes across Natural Park „Velkopopovicko,“ along the „Mokřanský“ brook, past the Štiřín castle, and all the way to Kamenice where it ends. The trail maps the heritage imprinted in the Velké Popovice and Kamenice region by Baron František Ringhoffer, the owner of the machine–making empire in Praha Smíchov and the founder of Velké Popovice brewery. He also founded many other smaller companies such as a  copper–hammer manufacturer, sawmill, brickyard, and a dairy, and thus he has contributed to the flourishing of regional craftsmanship. The trip includes ten stops and is 12.7 miles long.

This year’s main attraction is access to the Ringhoffers’ family crypt, possibly the most significant monument on the trip. The crypt, sensibly placed in the countryside on the “Zaječí” hill, was erected in 1887–1892 by architect J. Stibral. The final resting place of František Ringhoffer, the founder of the Velké Popovice brewery, is made of a semicircle wall of stone cubes with a bronze statue of The Crucified by J. V. Myslbek. The participants will have a unique opportunity to see the crypt and the surroundings up close. The memorial is closed to the public for the rest of the year. The event is organized by the micro–region Lada’s Country and Velké Popovice brewery.

How to get to the start and back home:

The walk is a  continuation of Praha Public Transportation. You can get to Mirošovice by train via route no. 221 (Praha, Main Station – Benešov u Prahy). The first train leaves at 7:20 am, then others follow at 7:50, 8:20, and then every sixty minutes. You can get back from Kamenice by bus, leaving from the stop by the Convention Centre going directly to Praha with a  stop at Budějovická subway station. Or you can use a van transport to Strančice train station with connections to Praha and Benešov.

Come for a spring walk with Velké Popovice Kozel across the country of Baron Ringhoffer. The trail is 12.7 miles long, and leads through picturesque countryside referring to the past glory of the founder of the Velké Popovice brewery, Baron František Ringhoffer. This year, the Ringhoffers’ family crypt, adorned with a unique sculpture by Myslbek, will be open to the public. Those coming dressed in period costumes reminiscent of the era of the Austria–Hungarian Empire are especially welcome. The tour of the Velké Popovice brewery with beer tasting (free for participants between 10:00 am and 1:00 pm), and the christening of newly born baby goats, offspring of billy goat Olda, the local mascot, are an integral part of the walk.