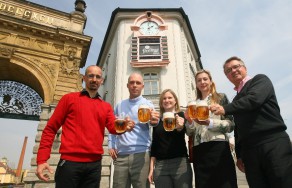 Between April and May, the already traditional student fiestas called„ Majáles“ (Muhyalis) will take place in four cities. Last year, more than 53,000 people attended the festival. This year’s attendees will have the chance to taste beer brewed by rock band UDG and by the kings of Czech students. It is this rock band that is one of the biggest stars of this Spring’s celebrations. „It was an excellent experience to see the heart of Gambrinus brewery, and to learn how Excellent 11° comes to life step by step. We have truly enjoyed brewing the beer together with the master brewer and the Kings. It was yet another chance to make something special for our fans,“ said Tomáš Staněk alias Jugy, the drummer of the UDG band.

The band used the opportunity to debut a new song from their upcoming album. „It was a  last minute, very spontaneous decision to introduce the first song from our newest record album well in advance at this occasion. The song went literally from the record studio right into the video clip,“ the band’s front ma Petr Vrzák added. This gives fans the ideal opportunity to hear the song in the „Majáles“ video before this Fall’s concert series.

The Kings of „Majáles“ from Hradce Králové, Plzeň, Praha, and Brno assisted the band with brewing the beer. Together they made beer that is known for its ideal blend of taste and refreshment. It was a fun–filled meeting. „Excellent is like „Majáles“ celebrations. You can win only when you connect ideas and capabilities of the whole group,“ Marek Kulkovský, Plzeň’s King of „Majáles“ said laughing. Immediately after, Brno’s King Zdeněk Navrátil said: „Beer is simply an inseparable part of our lives. Having a chance to brew this special batch of Excellent for „Majáles“ celebrations was an unforgettable experience. We are already looking forward to toasting with the new Kings.“

All attendees of „Majáles“ celebrations will taste the special batch of the beer on April 27th in Hradec Králové, April 27th and 28th in Plzeň, May 4th in Praha, and May 11th in Brno.