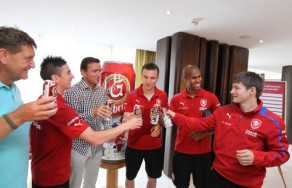 In Hotel Praha, Václav Pilař and Vladimír Šmicer took on the task of tasting the beer founded by their colleagues. However, Milan Petržela, David Lafata, and Theodor Gebre Selassie were there as well to check the results of their work. „You guys have made a wonderful „Gambáč“ („Gumbhuch“ – a commonly used Czech nickname for Gambrinus beer). However, just a sip today. We have a practise in the afternoon.” The team’s manager praised the five who, on April 24th, in Pilsen, became beer brewers for a while. “It was an interesting experience. I  am glad we did not do anything wrong, and the beer came out great,” Petržela commented on his activities in the brewery.

The fans will have a chance to enjoy the team members’ beer during EURO in restaurants serving Gambrinus beer. „We hope that there will be many occasions for a toast during the Czech team matches,“ Jan Kovář said, expressing his best luck wishes to the Czech soccer players at the European championship. „And for those who will support the team at home, or perhaps in front of giant screens on town squares around the Czech Republic, we have prepared a special edition of the beer in cans,“ Kovář added.

It is exactly this edition of beer cans with a  unique soccer motif signed by the national team members, together with national jerseys, and balls, that will be given away as prizes in a  contest prepared by Gambrinus for the fans in June.