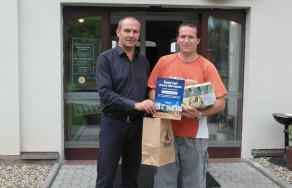 „Regardless of the increase in number of visitors over the last few years, the national spectrum of visitors is almost unchanged. Czechs make up 57% of visitors and more than 40% visitors come from abroad. The most foreigners come from Russian Federation where Velkopopovický Kozel beer is very popular,“ Karel Kraus, Marketing Manager of Plzeňský Prazdroj explains. Tourists from Germany, Great Brittan, Hungary, North countries, or even exotic places such as Australia or New Zealand periodically visit the brewery as well.

Domestic visitors come mostly from central Bohemia, and they do enjoy individual visits the most. Another category of visitors is made of cyclists who find Velké Popovice to be an ideal and popular trip tip. More than 83% of people interested in visitors’ tours come to the brewery in groups.

The jubilee visitor is Martin Kussior who spends his summer vacation near Popovice, and who visited the brewery with his family.  „During the tour, I mostly enjoyed the technologically advanced bottling plant as well as the information regarding materials and the overall production of Velké Popovice beer. I must admit, I have learned so much about the beer and my next meeting with Kozel will reflect my newly gained knowledge,“ the jubilee visitor shared of his experience from the brewery visit after he received a small gift from brewery representatives.

Velké Popovice brewery works very hard on making its visitors’ tour as attractive as possible. That is why it is so successful in presenting its visitors with interesting novelties. This year, the brewery expanded the trail “In the Footstep of Kozel” with a  40-metre long tunnel leading from lager cellars into the bottling house. They installed a new exposition in the historic brewing house built in 1928. The visitors will then have a chance to taste Velké Popovice beer from a unique bar in authentic environment of lager cellars.

The soul and a rarity of the brewery is a live mascot, billy-goat Olda, which is a natural part of brewery’s park, and which is present at a number of ceremonial, and other important events of the brewery. The first billy-goat came to the brewery from Uzhgorod in 1939; the name Olda was bestowed upon him by his first caretaker, and all of Olda’s followers are named after him.

Visitors can buy souvenirs with billy–goat motifs in Billy-goat Shop located in Visitor Center, or online in the e-shop. Another attraction for visitors of the brewery is “Little Billy-goat’s Conference Room,” an outdoor area for various events, and pub Kozlovna that opened in the brewery in 2010.

„For the faithful followers of the beer, Velkopopovický Kozel constantly prepares interesting events offering the visitors a chance to learn a lot of interesting information about the popular brand, and to spend a pleasant day in the brewery. For example, this Saturday, lovers of Velké Popovice beer and great food may come to enjoy our barbeque in the brewery,“Tomáš Raboch, Director of Tourist Services mentioned.

Barbeque in the brewery will take place on August 11, at 6:00 pm. There will be no shortage of Velkopopovický Kozel 11°, and in the afternoon, the visitors will enjoy live music and billy–goat’s funny challenges. Those who want to visit the new visitors’ trail of the local brewery should expect tasting of the honest Velkopopovický Kozel beer in its unfiltered form directly in lager cellars.