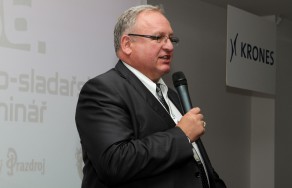 „Beer makers’ expectations from beer brewing and malt making seminars remain unaltered since their beginnings in 1958. The seminar offers a stimulating platform to share beer brewing knowledge and expertise among Czech and foreign brewers, ideas about the growing of the raw material, malt making ideas, beer brewing, and technological innovations; as important are casual, professional–themed conversations between all participants.“ Václav Berka, senior marketing master brewer of Plzeňský Prazdroj described the atmosphere of the seminar.

After the opening speech of senior marketing brewer Václav Berka, representatives of the Association of Breweries and Malt Houses headed by their executive director Jan Veselý focused on the responsible consumption of beer. Research workers, suppliers of technological equipment, beer brewing raw materials experts also took active part in the seminar. The researchers talked about the most recent themes, and presented the possible ways of further development of the making of Czech Beer while preserving and further developing the good name of Czech Beer at home and abroad.

Another theme, this time from agriculture, concentrated on a recent state and a development of new varieties of barley with the focus on preserving sufficient amounts of Czech raw materials for malt making, which is so important for preserving the existence of the trademark „Czech Beer.“ Hops growers also presented similar conclusions during their presentation of new varieties of hops. The suppliers of beer brewing equipment Krones comp. presented interesting reports focused on the solutions of modernisation of breweries of all sizes. The participants of the seminar included many Czech brew–masters, however, the organisers were especially pleased with the participation of brewers and experts who contributed to the fame of Czech Beer in Asia, Canada, Germany, and Great Brittan. Czech beer brewers were accompanied by guests from Slovakia.