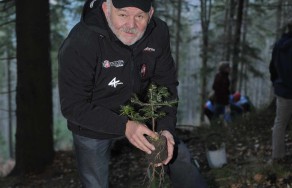 Equipped with a hoe and seedlings, Karel Loprais, six-time winner of the Rallye Dakar truck race, departed for the difficult Beskydy terrain as well. „It is our duty to preserve the beautiful nature of our beloved Beskydy Mountains. We must appreciate having it here. I did not think a minute about doing this, and immediately took off to plant some trees.“Alpinist Libor Uher also participated in the project together with Karlem Loprais, Moravia-Silesia Region Governor Deputy Daniel Havlík, Member of Parliament Kateřina Konečná and Senator Eva Richtrová.

It was Radegast who invited some of the important personalities of the North Moravia region to plant trees. “We were very pleased to see that our request to help Beskydy Mountains did not go unanswered, and we were able to create a group of more than 20 people. The money is important; however, in this case we needed some work to be done that required a trip to a hard terrain and the use of one’s own muscles. I am sure all of our participants were very happy they did this,” Radegast brand marketing manager Karel Kraus said.

They planted dozens of trees started under special conditions in the area of the first zone of the Natural Preserve Beskydy. CANP Salamander will plant other trees thanks to Radegast support. „This year, we plan to plant trees on three mountains: Smrk, Travn and  Lysa. Our effort is to recover the original composition of the woods in the rare parts of Beskydy that were changed by forestry in the past and that resulted in elimination of some of the original trees,“ Vojtěch Bajer, chairman of the association said, and added that the structure of Beskydy woods was drastically changed during the past two centuries. Spruces replaced fir and oak tree woods. The original species of trees were thus reduced by 63%.