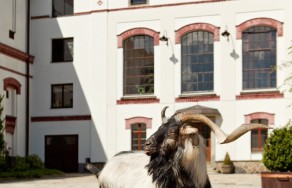 Martina Pulpit’s goal is thus very clear. During the remaining ten matches, Baník must earn at least 14 points. „It is not an easy task since we have very difficult matches ahead of us. On the other hand, we are playing 6 times at home, and so I believe that the sold out Bazaly (the name of Baník’s home stadium) will drive us to get those important points.“ Coach of the Baník players, Martin Pulpit, puts his hopes in power of their fans.

Less than 14 points means a clear task for him. After the season is over, he must take to a selected pub, get behind the bar, draw beer, and serve it to the fans. The coach made it clear that he will personally select a few members of the A team who will help him with the lost bet.

If the coach succeeds, a representative of Radegast Martin Troup faces a tough task himself. He must take to the team’s cabins for general cleaning. „In case Baník winnings and making our fans happy then the players and the whole team deserve to be entertained by watching me cleaning the cabins,“ Martin Troup said.