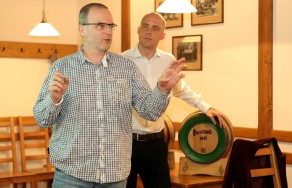 Moving the event to the October day means the fusion of the event with the celebration of the birth of Pilsner Urquell beer, the first golden lager that was so successful that it became the founder of the world’s most widely popular category of beer, bearing the name “pils.” Pilsner Fest will become the birthday celebration of Pilsner Urquell beer in the spirit of its originality, its world premiere position, and its quality, which has remained fabulous and unchanging since 1842. The design of the festival will also bring a few interesting changes to the programme, mainly in the happenings concentrating on the view of the history and the present, modern times that will be reflected in the main and in the accompanying programs.

The accompanying programme is inspired by the rich history of Pilsner Urquell beer. It includes not only the birth of the beer and the long lasting beer brewing tradition, but also the successes of the brand in modern times. Thematic division of the program will be designed according to the distribution of the beer in the brewery; the lower level will present traditional beer brewing crafts that will be available to visitors to try out, even in period costumes. In the upper level of the brewery, there will be the tent presenting the present of the brand. The finals of the international competition Pilsner Urquell Master Bartender is the main attraction here. The competition is gaining momentum at home as well as abroad. This year’s contest for the best bartender of the Pilsen lager in the world will be a part of the Pilsner Fest. Its visitors will have a chance to toast together with the world’s elite. Besides the finals of the international competition, the Czech bartenders will sow various styles of beer rafting. Visitors will have chance to try those out under their supervision.

Pavel Anděl took on the task of designing the music programme. The best of the Czech music scene will be presented on two main sages. To tickle your fancy, we can disclose the presence of Čechomor, who will put on acoustic show in collaboration with a symphonic orchestra. The other stage will hostKryštof band. The music part of the festival that will be revealed to visitors gradually will be hosted by the new MC duo Nasty & En.dru. They will not only announce the bands but also present their original show, which will be interwoven with the musical numbers. The winner of the “Urquell of Talents” contest that will take place before the festival during the Summer in Prazdroj event will also play at the Fest.

„It is our goal to prepare for our visitors not only a great experience connected with amazing music and fantastic beer but also remind them of the brewing of the first batch of Pilsner Urquell and the world renowned name of the lager. Therefore, we have not only paid extra careful attention to the main programme but also designed an extremely interesting accompanying programme, which will present visitors the history of the manufacturing on the beer via presentation of traditional crafts. It will also present visitors the present successes of Pilsner Urquell beer via the finals of the international competition Pilsner Urquell Master Bartender,“ Jan Šolta, Pilsner Urquell manager brand added.