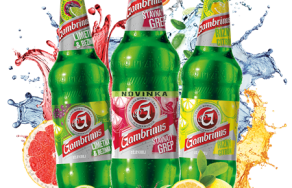 Practical from all perspectives

Over the last few years, popularity of PET packaged drinks among consumers has been on the rise. In segments of mixed beer drinks, this type of packaging represents 15% of sold volume while during the same time period last year, it was only 7% (January – May 2013 vs. same time period of last year, modern market, source: Nielsen). Consumers value the practicality especially. It provides them with a certain comfort during consumption. „PET bottles are light, strong and repeatedly closeable. Czechs simply see its advantages and so its market share is on the rise,” said Miroslav Peichl, brand marketing manager of Gambrinus. New packaging should support another boost in the interest in mixed beer drinks from Gambrinus that is sought after by consumers, especially for its pleasant taste and content. “Besides the characteristic, well-balanced taste of the traditional and popular Gambrinus beer, the fruit flavour results in low calories because there are no sweeteners or preservatives,“ Peichl added. Recommended retail price of one PET bottle of Gambrinus Flavoured is 42,90 CZK (about 2.00 USD).

During Summer 2012, mixed drinks reached 10% share in the total beer market and thus became the fastest-growing beer segment. „Since its introduction,Gambrinus Flavoured became one of the three most sought after products on market in the segment of mixed beer drinks. The bet on citrus fruit paid off. These are far more popular than any other flavours,“ Peichl announced. Varieties Gambrinus Lime & Elderberry a Gambrinus Crisp Lemon in cans also succeeded in the prestigious consumer survey, Consumers’ Choice – The Best Novelty of 2013, in the category of flavoured beers. Among many other brands, these products got the most votes from 4,000 respondents and became the most popular novelties of the last year. This March, Gambrinus added a new flavour based on citrus foundation – Gambrinus Juicy Citrus.