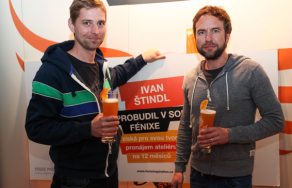 Come see and get to know the Velké Popovice brewery, where they brew the best-selling bottled dark beer, Velkopopovický Kozel Dark. Dark beer has always been an important part of the Velké Popovice brewery, and according to historic sources it was at the beginning of the brewery. The brewery, which was established by František Ringhoffer in 1871, was known for its speciality: the Bavarian, caramel, colouring malt prepared directly in the brewery. The machinery that was used to make the malt was made directly in the factories of the Ringhoffer family. Velkopopovický Kozel beer is a symbol and an inseparable part of Velké Popovice and the entire region.

Look under the lid of Velké Popovice master brewers

During the period from April to September, it is possible to visit the brewery every day from 10:00 a.m. to 6:00 p.m. The tour was recently expanded by a new exposition of the manufacturing process and non-traditional presentation of the history of the brewery. Thanks to these expositions, it is possible to learn about the rich history and present days of this famous brewery and to enter the secrets of the brewing processes of Velkopopovický Kozel beer in entertaining and fun ways. „The live mascot of the brewery, Olda the billy-goat, is part of the tour. Adult visitors may also enjoy tastings of Kozel beer in the brewery’s cellars,“ said Eva Kršňáková, director of Visitors Center of Velké Popovice brewery. In the vicinity of the brewery you can also find a newly built handicap accessible Visitors Centre and Billy-goat’s Store, which will please all beer lovers with its large assortment of beer-related artifacts.

Velkopopovický Kozel Dark is brewed according to the original recipe from a unique mixture of dark malts, special yeast cultures, a mixture of soft, aromatic hops, and underground water of the highest quality from forest wells. The unique quality of this beer is once again recognised by the certificate and the award of the regional mark, „Threshold original product.“ The Association of Regional Brands awards this mark to products that are unique for its connection to the region, for its character, tradition, culture, and history. The mark has two goals: to support local manufacturers that operate safely, traditionally, and in accordance with environmental protection acts, and to support sustainable tourist activities. The logo displays a stylised silhouette of a grown oak tree with an oak leaf in its crown. A gift pack of Kozel Dark is now marked with this logo and is available in the Billy-goat’s Store.