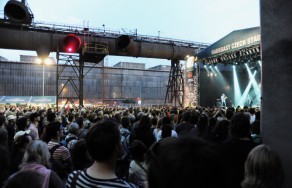 „An excellent programme, beautiful weather, plus the wide selection of beer, higher number of beer stations, and high quality service are the main reasons behind the record number of beers served at this year’s Colours. This summer’s novelty Radegast Summer Stein, which fell right into the colourful atmosphere of this year’s festival, has enjoyed especially high attention,“ said Karel Kraus,marketing manager of Radegast brand.

The most served beer was Radegast Original – 128.678 half-litres, followed by Radegast Premium, and the seasonal novelty Radegast Summer Stein. The beer was available at 250 stations from 122 taps, not only from barrels but from 4 trucks with 30 beer tanks. 20 brewery specialists took care of flawless service and the never ending supply of beer.

Parts of the accompanying programme were the entertainment zone Radegast Adrenalin Park, and the relaxing zone KLEE-DECK where visitors had an opportunity to relax and learn more about the responsible consumption of alcohol.

60 foreign bands, from 29 countries, and 46 Czech bands played at the festival. Under the watchful eye of the Radegast god, The Plastic People of the Universe, Umakart, and Květy, among the others, played on the Radegast Czech stage for four days. The festival offered not only music but theatre, films, discussions and workshops.