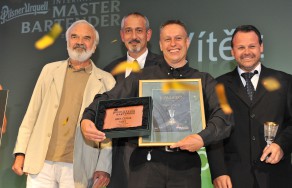 The twenty best bartenders (18 men and 2 women) qualified for the finals with their exceptional knowledge of Pilsner Urquell lager, from its specialised brewing process and rich history to its unique position among other beers. The contestants also proved their practical skills in proper beer care, proper beer serving, and appropriate presentation of the Pilsen original. Proof that the winning bartenders practised these methods in everyday life was another criterion for success, and Pilsen master brewers even went undercover in the contestants’ restaurants to study them for several weeks.

„The birth of Pilsen lager more than 170 years ago brought a revolution to the beer brewing world and became a model for all beers. Therefore, it is revered and properly cared for. I am convinced that with this difficult competition we are contributing to the preservation of high quality Czech beer in our pubs and the exceptional level of Czech beer culture,“ said Václav Berka, senior marketing brewer of Plzeňský Prazdroj and honorary chairman of a prestigious international competition.

The twenty finalists came together on August 14 and 15 in Pilsen brewery to compete with the best bartenders from the Czech Republic. Besides demonstrating the perfect serving technique in front of a jury and passing a complicated test on the premium lager’s brewing history, the contestants also served beer to the thousands of visitors at a concert in Kopecky orchards. With a Pilsen Queen tribute band and various Mediterranean bands, as well as great beer in front of the restaurant in the centre of Pilsen, the concert and competition were successful.

„I partook in the competition for the third time and I am so happy that it finally paid off. I am so happy that today, I can accept the cup. I would like to add, when I see Mr. Svěrák here, that I am not the same as the bartender from pub ‘Na mýtince.’ I love people,“ said Tomáš Hrnčíř, the new winner of Pilsner Urquell’s Master Bartender title.

In the eighth annual bartender competition Miloslav Bělský, from Wellness and Sport hotel „Šumava“ in Kašperske Hory, won the second place, while third went to Pavel Pressburg from „Malostranska beseda“ in Prague. The world finals will take place in Pilsen on October 5. For the first time, this event will take place during the Pilsner Fest, the celebration of Pilsner Urquell lager. Fans of the Pilsen lager will finally have a chance to experience the festivities at the height of the celebration. The motivation for all the contestants is the unique atmosphere, the title of the World Master Bartender, and 10.000.00 EUR for the winner.

A part of the event will be the awarding of the title of Pilsen Urquell Honorary Connoisseur, which director, writer, and actor Zdeněk Svěrák accepted from the hands of senior marketing brewer Václav Berka. The award is being presented by Plzeňský Prazdroj to people who have independently and continually helped spread the name of Pilsen lager.

„I am interested in what number I have. Miloš Forman has 007 and mine is 036, as I see. Perhaps, because I was born that year. I have love for the beer my father drank. We lived in the suburbs and my father often went to the „U Pinkasů“ pub with his friends. I did not understand why he went so far. And then I go it: because they have the best Pilsen beer,“ Honorary Connoisseur Zdeněk Svěrák said during the ceremony