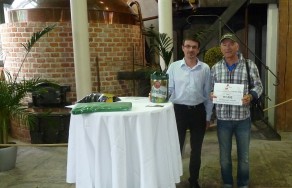 Mr. Sterios came to Pilsen from Greece, however, he surprised all with his fluent Czech, totally accent free. He was actually born in Bohemia and spent most of his life he there. He was very much looking forward to his visit to the brewery and he commented on his luck of being the 171,000th visitor: „we have a Czech restaurant in Solon named “Lokál” (Czech slang for a pub) and they naturally have Pilsner Urquell on tap. To be the jubilee visitor is a really pleasant feeling. I visited the brewery in the past, since I am a big fan of Pilsen beer. And because I liked the tour so much, this time, I brought friends with me. I would like to come back for the Pilsner Fest at the beginning of October.“
The jubilee visitor was welcomed by the employees of Plzeňský Prazdroj in the Visitors Centre right after he has purchased his ticket. He has received gifts from them as well. He was extremely pleased with the 5l barrel of Pilsner Urquell beer and a gift certificate to a company store in the courtyard of the brewery.

It is a tradition now to welcome the 100,000th or 200,000th visitors of the brewery tours in Plzeňský Prazdroj in Pilsen. Since 2010, the date of the announcements happens closer and closer to the beginning of the year since the number of visitors on the brewery’s tours is constantly rising. This year, in Prazdroj, they decided that instead of the full number they will announce 171,000th visitor. What is the reason? „This year, we have decided to announce the 171,000th visitor because Pilsner Urquell is celebrating 171 years of its existence. The main celebration of the birthday of this golden lager is the Pilsner Fest that will take place in few weeks on October 5, in the vicinity of Prazdroj brewery. However, we wanted to commemorate this important day this way as well,“Tomáš Raboch, director of Visitors Centre in Pilsen said.

„For the Pilsner Fest, we have prepared nontraditional tours of the brewery focused not only on the Pilsen lager but also on crafts directly related to its history and production.  Visitors will have a chance to listen to inspiring talk of our cooper gang right in the cooper house, cellar masters and ice-men will be ready to answer questions in brewery’s cellars and one of our ice-rooms,“Tomáš Raboch of Plzeňský Prazdroj added. As a part of the tour, visitors will have a chance to win a 50l barrel of Pilsner Urquell. The tours will cost 70,- CZK (about 3.5 USD) and they will take place in 15 minute intervals to reflect the higher demand.

The demand from tourists and individuals, as well as groups, is given by the famous name of the Pilsen lager and well-crafted destination marketing strategy of the company. Most visitors come to the brewery from home and, traditionally, from Germany. They are followed by tourists from Taiwan. Frequent are also tourists from Russia, the USA, and mainly from European countries. Visitors from all around the world come to the brewery every year, and so it is not surprising to meet tourists from India, Brazil, Israel and distant Australia on one of the brewery tours.

The new Plzeňský Prazdroj press contact Kateřina Krásová is available to the media at: