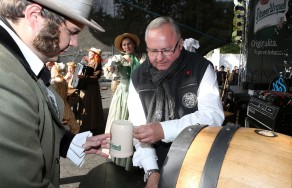 Pilsner Fest was opened by the unique show of Pilsner Urquell’s partner the National Theatre. The relationship between the “Golden Chapel” and Pilsen brewery is very good. The citizens’ brewery in Pilsen supported its erection in 1880 with 5,000 golden coins. The actors performed several short sketches about historic milestones in the beer making tradition of Pilsen. The festival was then opened by the tapping of an oak barrel of unfiltered Pilsen lager. Pilsner Urquell beer was available on 171 taps; a number symbolic of the years this golden lager has been offered. The visitors of the Pilsner Fest drank about 83,000 half-litre glasses of beer.

11 foremost bands from the Czech music scene played on two stages. The great atmosphere was provided by Kryštof, Mandrage, Sunshine, Čechomor, Blue Effect and other bands. Too Late and Bags, the winners of the last two years of the young musicians competition „Urquell of Talents“ showed their skills in front of the big audience. MC duo Nasty and En.dru put on a show for the fans as well.

The Pilsner Urquell International Master Bartender tent attracted great interest from the public. Next to the finals of the competition for the best bartender in the world, the public was drawn to school of beer serving, and individual performances by all finalists. The winner of this year’s prestigious competition, and the best bartender in the world, is František Šťástka who serves the beer in the restaurant Hospoda, in New York. The Master bartender of the Czech Republic Tomáš Hrnčíř, who was supported by Czech Olympic winners David Moravec and Petr Koukal, excellently placed third.

Non-traditional brewery tours attracted almost 2,000 people. That is the highest number of tour visitors for one day ever. This shows the high interest in the history and present production of the golden lager as well as the beer making crafts. A guessing contest was a part of the tours. Each visitor had a chance to guess when an ice cube placed in the cellar ice-room would melt. The guest with the closest guess will win a 50-litre barrel of Pilsner Urquell beer.

Pilsner Fest also produced a new Czech Record in the holding of double-steins. During the dramatic finals observed by the commissar of Good Agency, last year’s winner Petr Němec beat his own record by 6 seconds with the time of 11:27.

Other programmes such as original beer making crafts were also very attractive. In four tents, visitors could make an oak with master coopers, taste warm malt mass and malt pastries, or become a bartender or ice-master for a while. Several hundred visitors took home with them a finishing certificate for one of these crafts. During Pilsner Fest, visitors also selected the best product to be sent to the competition Craftsmen, create! The best creation inspired by beer making tradition, according to the public, was an oak table decorated with the motifs and symbols of Pilsner Urquell beer.

Visitor comforts were also provided at the K-lee-deck zone. Thanks to the cooperation of the Plzeňský Prazdroj brewery and Promile INFO services, people had a chance here to blow into the alco-tester to learn when It is safe for the to drive again. The main innovation of this year’s Pilsner Fest was returnable cups, which were often taken home as souvenirs.