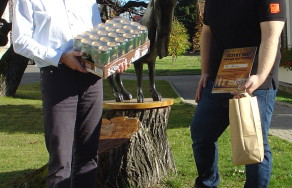 The celebrated 25,000th visitor is Mr. Petr Kuldan from Strašnice. “I love Kozel. My favourite one is Kozel Medium 11°. I am glad I decided to come to see the brewery today and saw how my favourite beer is made. The brewery visit was truly a unique experience. I most enjoyed the tasting of unfiltered Kozel beer directly in the lager cellars. I also enjoyed the presence of the live billy-goat that is an inseparable part of the brewery, supervising the production of the beer. I will recommend the visit to all my friends and acquaintances and I will return myself,” Mr. Kuldan said of his experience. From the manager of the brewery, Jaroslav Hacek, he received the certificate of the honorary guest and Velkopopovický Kozel beer for home.

The interest in visiting the brewery in Velké Popovice is on the rise. “People come to our brewery to see where and how their favourite beer is made. They often come to meet the master brewer and to taste the fresh beer directly, right in the lager cellars,” Jaroslav Hacko, manager of the Velké Popovice brewery said. Eva Kršňáková, director of the brewery’s visitor center of the brewery in Velké Popovice added: “Since 2007, when we welcomed about 10,000 visitors per year, the number of visitors is constantly on the rise.
In 2012, 28,000 people came to the brewery during the season and this year, we have already welcomed 25,000 fans of Velkopopovický Kozel on our visitors’ tours. 60% of visitors interested in the visitors tour of the Velké Popovice brewery are from our country. These visitors come individually, especially during the spring and summer months. The brewery is visited by tourists from Russia, Slovakia, and Hungary where the Velkopopovický Kozel is one of the most popular beers.”


Press contact of Plzeňský Prazdroj Comp. Kateřina Krásová is available to media at: