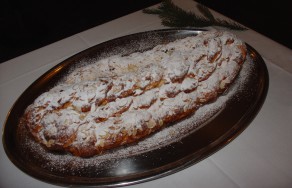 Billy-Goat’s Christmas and the contest for the best Christmas Bread of the Region are a traditional part of advent time at Velké Popovice brewery. Public voting decided the winner of the third year of the contest after the look, smell and taste of all 8 submissions were evaluated. The winner is Věra Pálová, who used a traditional family recipe that will be shared on the brewery website and in the next Velké Popovice Newsletter. “The right Christmas bread, the symbol of Czech Christmas, must smell beautifully, it must be tender and moist. We invest a lot of love into making it at our home. The traditional, generational-tested recipe, made with only the best materials and lots of love, these are the guarantees of success for any meal made,” Věra Pálová summarized.

For her honest culinary efforts, the winner took home a package of Velkopopovický Kozel beer, a voucher to Velkopopovická Kozlovna and a gift basket from Billy-Goat’s Gift shop. “As we did during the last two years, we have also rewarded one of the 48 voters, Miss Eva Papánkova, who is taking home with her a set of original Billy-Goat’s half litre beer glasses,” said Eva Kršňáková of  Velké Popovice brewery.

The entire afternoon, visitors took part in creating the traditional Velké Popovice Nativity Scene in Kozlovna. Under the watchful eye of an experienced baker they added to the wooden frame, creating the Christmas Eve scene from Bethlehem using handmade and hand-decorated gingerbread cookies. As a reward, all participants took home one professionally decorated cookie. The gingerbread Nativity Scene will be placed in an honourary display in the Visitors Centre of the brewery for the duration of the Christmas Holidays.

On the tour of the brewery, visitors to Billy-Goat’s Christmas had a chance to enjoy a trip through the brewery’s rich history enriched with Christmas stories, delicious unfiltered beer served in the brewery’s cellars, a walk through a lit tunnel, the legendary live mascot and many other attractions.

Press contact of Plzeňský Prazdroj Comp. Kateřina Krásová is available to media at: