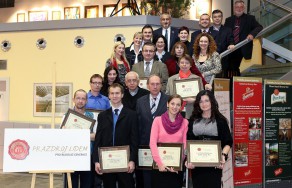 On Wednesday, December 11, the festive announcement of the results for this year’s Prazdroj to People Programme took place in the Visitor’s Centre of Plzeňský Prazdroj.  The winner was the Centre Hájek project, submitted by the Association for Help to Handicapped Children, which runs day- or week-long programmes for handicapped children in the Pilsen region.  The employees of Plzeňský Prazdroj also selected a project from a Roman Catholic perish in Pilsen called the Bells of Pilsen, which will support the manufacturing and installation of bells in the cathedral of Saint Bartholomew. The council of select men chose a project as well, and their choice was the Research and Science Library of the Pilsen region, which will use the resources to restore historic books, especially two Czech bibles from the 16th century.

Nearly 8000 votes decided the distribution of grants. The public had a chance to vote for their favourites using a voucher in the Pilsen Daily, over the internet, or by SMS text.  At the same time, voting at the Plzeňský Prazdroj company took place.

Next to the 3 winning projects, the Plzeňský Prazdroj company also awarded a financial grant to another seven projects that were granted finances according to the number of votes they received. They are: New Consulting Centre Iceberg III., 18th International Folklore Festival CIOFF “Plzeň 2014,” the renovation of a train lounge car into a shelter, Bambino creativo = futuro positivo, Plzeň Folklore Christmas, and Summer Theatre Under the Pilsen Sky (7th annual).

„The slogan of this year’s programme was ‘For the Future Generations,’ which is a clear call for organisations to submit projects that will bring history and benefits to future generations.  I am glad that the money from the program (programme) will help the realisation of good intentions that will stay here for many years to come,“ said Drahomíra Mandíkova, Director of Company Relations and Communications at Plzeňský Prazdroj. According to Drahomira Mandikova, they are clear about the future of the Prazdroj to People Programme in Plzeňský Prazdroj: „It’s a unique and grand programme in which the citizens of the region, the personalities, and our employees have a very strong say.  We have distributed nearly 44 million CZK (around 2.2 million USD) in the Pilsen region through this programme.  We will continue with this tradition from the past twelve years next year as well, and I am certain that we will receive many interesting projects.“

The PRAZDROJ TO PEOPLE Programme started in 2002 in the Pilsen region. It was then known as the People’s Choice of Plzeňský Prazdroj. Since then, 610 projects have been submitted to the programme.  Including this year, the best 156 projects have received nearly 44 million CZK (around 2.2 million USD). In public voting, people have sent in more than 100,000 votes.