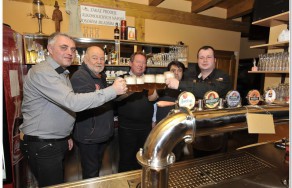 Thousands of people who come to see Radegast brewery every year can now enjoy an interesting novelty. In a pub called „U Bobra„ (At Beaver’s) in nearby Raškovice, they’ve opened a Beer Academy led by the vice-master in beer serving Jakub Šrubař. People can learn here how take care of beer, but mainly how to draft it well. The first graduate of the Beer Academy this week was Karel Loprais, winner of the Dakar Rally six times.

The pub „U Bobra“ in Raškovice offers excellent food and beer and now a chance to learn. „Together with experts from Radegast, we have opened our Beer Academy. We would like to show our students how to draft beer and what to do to make sure it tastes its best. We believe that people will like our idea and that it will become a popular learning center,“ says Jakub Šrubař, Czech vice-master in beer drafting, who leads the Academy.

The pub „U Bobra“ is only a few miles from the brewery. It is an ideal place for tourists visiting Nošovice to come after a tour of the brewery. „People have a chance to see the place where the beer is brewed and then see how to take care of it and draft it well. We are certain that the Academy graduates will become ambassadors of our Radegast and will see it’s correctly cared for and served in pubs they visit,“ says the director of Radegast Visitors Center, Martina Sikorová.