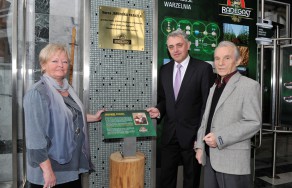 Jaromír Franzl Brewing House; that is the name of Radegast Brewery Nošovice’s brewing house. The brewery thus pays homage to the respected beer brewing expert who died on September 30, 2013; he was 94 years old. Jaromír Franzl is in the Czech Beer Brewing and Malt Production Hall of Fame, and was the first brew master of the Radegast brewery. He was the one who gave Radegast beer its characteristic bitterness that was very unusual at the time.

„Mr. Franzl showed great courage, which came from his life and professional experience. In 1970, in the newest and biggest brewery in Moravia, he did not hesitate to brew beer which had an absolutely unusual taste due to its strong bitterness. He resisted the pressure from critics and stood his ground. In the end, people admitted he was right and that still stands today. We’ve brewed beer according to his heritage to this day,“ said manager of Radegast brewery Ivo Kaňák. Along with Jaromír Franzl’s daughther Lygia Kuběnova and Nošovice Mayor Miroslav Kačmarčík, he uncovered the plaque that will remind visitors of the famous brew master.

Jaromír Franzl’a heritage might be appreciated by the town of Nošovice as well.“I will propose to the council to award honourary citizenship in memoriam to Jaromír Franz as to the first citizen of Nošovice,” said Nošovice Mayor Miroslav Kačmarčík.

Jaromír Franzl came from a family with a strong beer brewing tradition. He was the family’s sixth consecutive brew master. He studied beer making and worked in many famous Czech and Moravian breweries. He was chosen as a brew master for the newly built brewery in Nošovice as one of the best beer experts in the country. He worked there as brew master and director until his retirement in 1981. After that, he stayed in Nošovice and lived nearby. He was a tutor and advisor to his younger colleagues until his death.