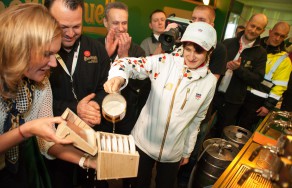 Martina Sáblíková, a fresh gold medal winner from the Olympic Games in Sochi, launched two sets of unique Olympic coasters in a Pilsner Urquell tent in Prague-Letna. One set is meant for a charitable auction on Aukro, an online auction site, which will support Centre Umbrella, a charitable organization, and the other will be given as a gift to Martina by Pilsner Urquell, the general partner of the Czech Olympic team.

On Sunday, one of the most wonderful Olympic moments happened in Prague–Letna. Two-time Olympic medal winner Martina Sáblíková came to greet her fans right from Sochi. During her visit in the tent of Pilsner Urquell, a long-time partner of the Czech Olympic team, she launched two sets of a unique collection of Pilsner Urquell Olympic coasters by christening them with Pilsen beer. The first set will be auctioned on Internet auction site Aukro to support the charitable organization Centre Umbrella. The second set is a gift for Martina to remind her of her golden story. The attractiveness of the auction is enhanced by the fact that these artistic sets will not be available for purchase. They are meant only as presents for exceptional personalities of Czech sport and social life.

„Each one of the six coasters represents one Czech Olympic golden story. Each original story of every athlete is connected with the place of the Games conquered by Czechs for a while. That is why Pilsner Urquell honors all Olympic athletes with the unique coaster collection designed by artists from Grenoble, Sapporo, Nagano, Salt Lake City, Turin, and Vancouver. These are the places where we won gold,“ says Lukáš Novotný, brand manager of Pilsner Urquell, and adds with a smile: „Martina will be surely pleased to see her own coaster from Vancouver made by Andy Wang.“

Martina, who together with this year’s five other Czech medal winners won free Pilsen Urquell beer for a year, was accompanied by a group of 30 of her most faithful fans. They were rewarded for their support with thirty 5l barrels of golden lager. The „golden skates“ from Vancouver that took Martina to her gold were on display in the Pilsner Urquell tent where you could enjoy beer perfectly served by champions among bartenders for the entire duration of this year’s Olympic Games.