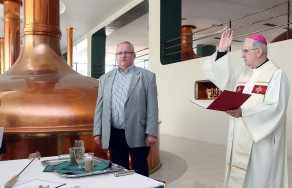 The Easter batch of Pilsner Urquell was once again brewed in Pilsen brewery this year. Monseigneur Bishop František Radkovský blessed the basic raw materials as well as the golden lager itself. A traditional portion of the Easter batch will travel to the Vatican for the celebrations of Easter, and this year also for the official canonization of popes John Paul II and John XXII. Symbolic 2014 bottles of the golden lager will be sent to the Vatican.

“I am blessing the Easter batch for the fourth time this year. As I did with my first blessing, I firmly believe that it will bring profit to the Pilsen brew masters. I have informed His Holiness Pope Francis about this year’s Easter gift, which is a symbol of our city and of our country, during my last visit to the Vatican. I am glad that this tradition is still alive and that Plzeň has always had its representation at the celebrations of Easter in the Vatican,” said Bishop František Radkovskýwho, together with master brewer Václav Berka, signed the brewing certificate. The certificate will travel to the Vatican together with the Easter beer batch.

“Traditionally, the number of the bottles sent to the Vatican is the same as the year in which they are sent. This year it is 2014. Our lager found its way to Rome 111 years ago. In the past, Pope Leo XIII had it shipped there since his doctor recommended it to him as a medicine. It is a great honour for us that our beer is part of such important events as the Easter celebrations in the Vatican and the beatification of two of the most important personalities in world history. I am convinced that our beer will become a firm part of Easter meals at our Czech tables as well,” added senior marketing brew master Václav Berka.

This year, Pilsen beer does not travel to the Vatican just to celebrate the most important Christian holiday. On Sunday, April 27, the canonization of popes John Paul II and John XXII, historically the most beloved heads of the Catholic religion, will take place, and Pilsner Urquell will be part of the event as it was during the beatification of John Paul II in 2011. The canonization is very important act that is witnessed in Rome by hundreds of thousands of people from all around the world.

To give Pilsner Urquell beer enough time to mature, it must be brewed three months ahead of time. In Plzeňský Prazdroj, they still brew beer according to the original recipe of the first malt master Josef Groll. The beer is brewed in copper pans with handmade cleaning chains, fire is used to heat the pans, and batches are mashed three times. Fermentation and maturing take place separately for as long as it did during the times of the birth of this lager. Thanks to that, Pilsner Urquell has preserved its original taste qualities.