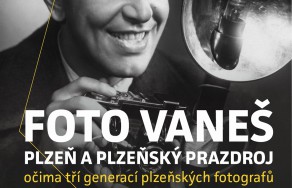 To commemorate 55 years since its opening, the Beer Brewing Museum in Pilsen prepared a series of interesting exhibitions. One of them is a display of 100-year-old photographs from Foto Vaneš studio that will be open to the public from March 27 to May 23, 2014.

“For three generations, the Vaneš family has taken many types of photographs for Pilsen citizens as well as for many companies. Plzeňský Prazdroj has also cooperated with the family firm for nearly 100 years and that is the reason the exhibition is called “Foto Vaneš – Plzeň and Plzeňský Prazdroj through the Eyes of Three Generations of Pilsen Photographers.” The family’s tradition and history started 100 year ago with Alois Vaneš, who was followed by his son Sláva. Today, the newest chapters are written by his grandson Marek. Thanks to their pictures, our visitors will witness time not only in Pilsen but in our brewery,” said Vendula Hnojská from the Beer Brewing Museum in Pilsen.

Many photographs in many styles were created in the Foto Vaneš Studio during its long existence, from coloured portrait photographs of celebrities to landscapes, industrial images, and documentary photography. Visitors of the exhibition will witness the past, via period photos, along with some not very well-known pictures of the Pilsen Brewery that include documentation of employees and their horses dressed up for a circus in the vicinity of the Plzeňský Prazdroj Brewery.

The Beer Brewing Museum in Pilsen, which is located in the authentic house “with the rights to brew beer” is celebrating its 55th anniversary this year. It has been owned by many  during the first half of the 20th century, and as a museum it has been open with only a few interruptions since May 8, 1959. To commemorate the 100th anniversary of the trademark “Pilsen Beer,” thousands of visitors will come to visit this unique European museum. They can admire the unusual beer brewing presentations containing hundreds of artefacts, as well as the depository of the museum, which holds an additional 70,000 artefacts related to beer brewing.