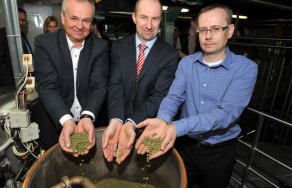 Those living in the Třinec region may look forward to perfectly bitter 15-degree beer. Radegast Brewery will brew special beer to celebrate 175 years of Třinec Steel Mills. People will have a chance to try it during Steelers Day on May 3 and in Třinec pubs. Třinec region citizens themselves, in public voting, picked the name of the beer. Jan Czudek, general director of Třinec Steel Mills, Petr Kwaczek, master brewer of the Radegast brewery, and Jan Peterek, a Třinec hockey legend, founded the batch of the Radegast Fajront beer in Nošovice today.

“Radegast is known for its distinguished bitterness. That is very strong in Fajront thanks to a higher quantity of the highest quality hops, Žatec semi-early red. The bitterness is pleasant thanks to the rich malt taste. I am convinced that Třinec steel mill workers will enjoy this bitterest of Czech beers,” said Radegast brewery malt master Petr Kwaczek describing the taste of the beer.

General Manager of the Třinec Steel Mills Jan Czudek came to Nošovice to found the batch of Radegast Fajront by distributing hops and then he signed the brewing certificate. “I am glad that we came to an agreement with the brewery and that our people will have special beer especially made for them for the celebrations. I can’t wait to enjoy it during the Steelers day,” said Jan Czudek.

The name Radegast Fajront was chosen for the new beer by citizens of the Třinec region themselves. 3,000 votes came during the voting. The Fajront victory was absolute. The special beer will be on taps during Steelers Day on Saturday, May 3, and then in many pubs around the Třinec region for the next few weeks. The list of the pubs will be available online at www.radegast.cz.