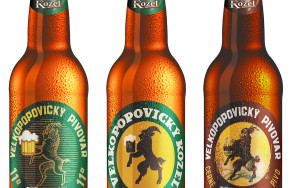 The Velké Popovice brewery has been making beer since 1874. This year, we celebrate the 140th anniversary of its founding. The brewery will introduce six limited edition bottles with retro labels as part of an anniversary celebration that will take place the whole year long. The labels will appear on bottles of Kozel Light, Kozel 11° and Kozel Dark. The limited edition bottles will be available starting mid-June.

As legend tells it, a French painter who was travelling around the world and happened to end up in Velké Popovice during his travels created the image that became the trademark of Kozel. The painter had enjoyed the hospitality of Mr. Ringhoffer at his castle and in the brewery’s pub, and repaid that hospitality with a painting of a billy goat.

The billy goat has been featured on bottles of the traditional Czech beer since 1922, the year the brewery registered the trademark and the name “Velkopopovický Kozel.” The goat can be seen on bottles, cans, and billboards today.

The limited edition bottles will be available in stores starting mid-June. The main anniversary celebrations will take place at the Velké Popovice brewery during the “Day of Kozel” on Saturday, June 14. Additional information about celebration events is available at www.kozel.cz and on our Facebook page, www.facebook.com/KozelCZ.

Other important events of 1874: