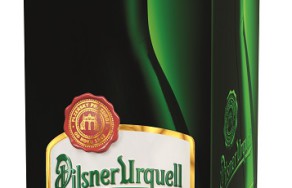 Every year, the second Sunday of May belongs to the celebration of Mother’s Day. There are many appropriate presents for women, but a much harder task is coming up with a gift only one month later when our fathers take centre stage. Unlike Father’s Day, Mother’s Day has a long and firm tradition, and according to a survey* taken last year, more than two thirds of respondents agree that Father’s Day should not be ignored. Plzeňský Prazdroj prepared a special 1l gift bottle for all those who want to thank their fathers. Additionally, men who will become fathers on June 15, 2014 may get a 50l barrel of Pilsner Urquell beer!

On Mother’s day, cafés and restaurants are filled with celebrated mothers, flower shops are busier than ever, and chocolate sales are through the roof. Coming up with a present for moms, however, is not as complicated as finding one for dads. Although Father’s Day is not a state-recognized holiday in the Czech Republic, it has been celebrated on the third Sunday of June for more than 100 years around the globe. What that fact in mind, do not forget to mark your calendars on both May 11 and June 15.

Behind every Father’s Day is a woman! The first mention of a “father’s day” came, once again, from the USA when, in 1910, Sonora Smart Dodd decided to celebrate her widowed father who took over the upbringing and education of his six children. This spontaneous celebration, taking place in Spokane, Washington on the West Coast of the United States, quickly became a phenomenon. Father’s Day was officially recognized in 1966, and is also celebrated in Europe, with countries such as Germany and Poland taking part.

According to a survey* conducted by Plzeňský Prazdroj last year, nearly 70% of respondents agree that Father’s Day should be recognized and celebrated. “The third Sunday of June belongs to fathers, and Pilsner Urquell has supported the idea of a Father’s Day celebration in the Czech Republic for several years now,”said Lukáš Novotný, brand manager of Pilsner Urquell. “We would like to make life easier for all those who want to buy the perfect gift, and therefore, we have prepared a 1l bottle designed especially for Father’s Day. We will also add a special beer gift to all men set to become fathers on June 15,“ he adds. Plzeňský Prazdroj will deliver a free 50l barrel of Pilsner Urquell for free to pubs that have PU on tap so they can celebrate with their friends.

*Survey conducted by IPSOS survey agency in May 2013 using the population sample of 1018 respondents with answers “yes” and “probably yes.”