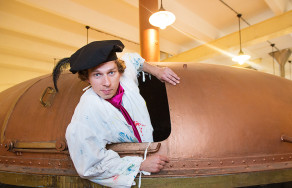 In the picturesque historic brewery in Velké Popovice, they’ve been brewing good Czech beer for 140 years. Velké Popovice brewery invites you for guided tours with the wandering painter, who painted the beer labels with a billy-goat on them. Special tours are available to visitors for the Day of Kozel on Saturday, June 14.

It will be possible to see the craft of Velké Popovice master brewers together with the wandering painter until the end of the year. “Special tours will teach visitors in an unconventional way about the rich history of the brewery from its founding by the Prague industrialist Baron Ringhoffer in 1874 until today,” saysdirector of the visitors center in Velké Popovice, Eva Kršňáková.

It is said that a wandering French painter, who came to Velké Popovice at the beginning of the last century, paid Baron Ringhoffer for his hospitality by painting a billy goat. The painted billy goat appeared on the labels of the Velké Popovice beer for the first time in 1922 when the Velké Popovice brewery registered its brand and the name Velkopopovický Kozel. It is still used on bottles, cans and in advertisement today.

There is one more attraction prepared for adult visitors during the year-long celebrations for the 140th anniversary of the founding of the brewery. At the end of a tour they will receive an original coin, which can be kept as a souvenir or exchanged for a Velkopopovický Kozel beer in selected restaurants. A good idea is also to visit the Billy-goat’s Gift Shop in the Visitors Center to get original gifts and souvenirs prepared especially for this year’s anniversary. Visitors may choose from a wide assortment of T-shirts and glasses with retro themes.

Visitors can meet the wandering painter during the brewery tours on the Day of Kozel on Saturday, June 14. The 22nd annual beer festival will happen in the spirit of the celebrations for the 140th anniversary of the founding of the brewery. The event will host the band Divokej Bill, whose members, under the supervision of master brewer Vojtěch Homolka, brewed the batch of unfiltered lager for the Day of Kozel. The music program will also present Patrola Šlapeto, Děda Mládek Illegal Band and Sto zvířat bands.

Next to good beer and quality entertainment, chefs will prepare period food from 140 years ago. Traditional crafts will be on display during the day. Visitors can read the historic, first Billy-goats newspaper and a historic steam train will go from Prague and Benešov to Strančice. The brewery has also invited 140 people named Kozel or Kozlová, who will be making toasts with the unfiltered lager, served from a 140-liter barrel.

As a part of the celebrations for the 140th anniversary of the founding of the brewery, Velkopopovický Kozel has introduced to the market a limited edition of six bottles with retro labels. They will be available for purchase in stores until the end of June. More information can be found at www.pivovar.kozel.cz.