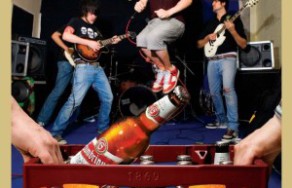 In 2006, overall sales of Plzensky Prazdroj domestic and export brands reached almost 10.7 million hectoliters, representing an increase of 5.7% year-on-year. In particular, export sales made a significant contribution to the increased volumes, including the licensed production of the Plzensky Prazdroj brands.

In 2006, domestic beer sales reported growth of 2.4%, reaching 8.1 million hectoliters. The highest growth sales growth was recorded in the South Bohemia region (Ceské Budejovice and neighborhood) where it rose by 7% year-on-year. The Pilsner Urquell brand recorded volume growth of 4.6% and Velkopopovický Kozel, with 10.3% growth, achieved its best year-on-year result. The company saw good growth across all Velkopopovický Kozel packaging units, but the best performance was achieved in [draft] barrel beer, with a 22% year-on-year change.

“Despite the seasonal swing over the summer, our 2006 domestic sales were characterized by the overall stability of the market. We have achieved good export and have started exporting Plzensky Prazdroj brands to three more countries (Honduras, Oman and Turkey) and you can therefore buy our beer in 53 countries throughout the world.”

“We have increased our exports mainly to the EU countries – Germany, The Netherlands, Italy, Spain, Denmark, France and the Scandinavian countries. The Pilsner Urquell lager is now Number One among the imported beers in Germany. In particular, increased marketing activities of Plzensky Prazdroj and SABMiller on the relevant markets supported the sales growth.

“The strictly controlled license production of some of our brands on the carefully selected markets in the neighboring countries has shown a very positive development dynamics. Especially the sales of the Velkopopovický Kozel brand, which benefits from its growing reputation of a high quality traditional Czech beer with acceptable price, have been growing.

“We are also pleased with the slight increase of our share of the domestic market achieved under harsh competition conditions. Our concentration on the key brands, support to domestic and foreign production and careful monitoring of the customers’ needs will create the prerequisite for our successful business on the brewery market also in the years to come.”

Most important facts and trends of 2006 from the viewpoint of Plzensky Prazdroj: