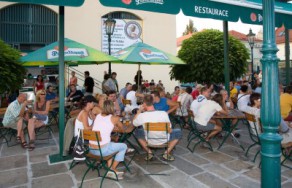 The document and its supplements cover such areas as tourism development and promotion, major cultural and social events‘ organising, information exchange regarding the topics of mutual concern, environmental issues as well as co-operation in cases of emergency. Special working committees are created to facilitate the co-operation within outlined areas.

The recent example of the co-operation between the city and the brewery was opening and support of an open-air photo exhibition in Pilsen, focused on sustainable development issues.

“Our historical brewery in Pilsen has become one of the most important symbols for the city and the whole region. The brewery belongs to the most attractive tourist destinations in the Czech Republic and itself represents a living cultural and social centre within the city of Pilsen. Therefore we naturally share common aspirations, interests and needs of Pilsen inhabitants and visitors”, says Mike Short, Plzensky Prazdroj Managing Director. “We believe that by common efforts we will manage to create and support the image of Pilsen as a true world beer capital.”

Pilsen Lord Mayor, Pavel Rodl says: „Plzensky Prazdroj belongs to the most important companies the city co-operates with. As of today this co-operation has got the solid basis of the long-term declaration focused on tourism and mutual support of major events. I believe we will be able to achieve all proposed activities so that both parties are satisfied. I also believe Pilsen inhabitants as well as visitors will benefit the most from this co-operation“.

List of some common projects outlined in the Declaration’s Supplement: