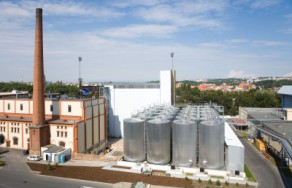 Plzensky Prazdroj thus confirmed its position as the largest beer exporter in the Czech Republic. The total volume of Plzensky Prazdroj’s brands exported abroad (i.e. exclusive of the licensed productions) grew by 12.5%, reaching 430,000 hectolitres in the first half-year 2007. Pilsner Urquell, major export brand, recorded 11% increase year-on-year. The key export markets remain Germany, USA and Slovakia however some new countries have been added to Plzensky Prazdroj’s export map, such as Albania, Georgia and Montenegro.

Domestic sales growth was 4.8% compared to the 1st half-year 2006 – in line with the Czech beer market overall development. The sales of the Czech “bestseller” Gambrinus reflected 2.2% growth in H1 of 2007, while international premium brand Pilsner Urquell grew by 4% in the Czech Republic.

„Our sales results are satisfactory, in line with the market development. A positive contribution to the success of our brands was, along with our marketing and trade marketing activities, the early start of the ‘summer’ season. Sales during the unusually warm and sunny spring 2007 saw a very strong performance. Thanks to the warm weather, typical holiday and ‘barbeque’ types of packaging grew significantly in the first half-year, i.e. cans (+17%) and multipacks (+65%)”, says Otakar Binder, Sales & Distribution Director, Plzensky Prazdroj, a.s..

The most significant facts and trends of H1 2007: