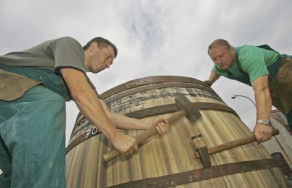 This year's record breaking celebration of pilsner beer offered a wide variety of activities all around the city, gastronomical experiences and fine weather.

The 165th anniversary of pilsner beer, the Pilsner Fest, culminated in a concert of folk brass music in the brewery courtyard. Unlike past celebrations, this year the festival spread all across the city and started as early as Wednesday, October 3.

The festival programme was not limited just to music, but also included readings by popular Czech authors, an organ concert at St. Bartholomew's Cathedral, an adrenalin G-City attraction, the Pilsner Urquell Olympic Games and other events.

The celebration was also joined by Pilsner pubs and clubs, where visitors had the chance to appreciate not only special musical performances, but also a keg of beer free of charge for the evening. Guests at Pilsner Urquell Original Restaurants around the country could also take part in the 165th anniversary of Pilsner Urquell beer by drinking 165 beers for free on Friday, October 5.

Although it was virtually impossible to count the visitors scattered all around the city over the five days, organizers estimate that with the help of the favourable weather this year's Pilsner Fest broke all records in attendance.

“Pilsner Fest is an extraordinary festival. Its intention is not to compete with other events whose main aim is maximum sales volumes and huge crowds. For Czechs, beer is more than just a beverage. It is a social and cultural institution. I believe that this year's Pilsner Fest merely confirmed this fact unequivocally by its concept and the visitors' behaviour,” says Marek Hlavica, Plzensky Prazdroj's Corporate Communication Manager, on behalf of the festival's organizers.

Audiences flooded the area in front of the Pilsen City Hall, where local bands from West Bohemia gave performances. Perhaps the most warmly received were Jiri Suchy, a native of Pilsen, and Jitka Molavcova, who got the whole crowd singing along during their concerts.

The Gambrinus stage at the Victoria Plzen football stadium was virtually bursting at the seams when the legendary band Olympic christened their new CD with the most popular Czech beer brand – Gambrinus.

The Pilsner Urquell stage in the brewery courtyard presented the best of Czech rock and popular music. Among other things that attracted the attention of visitors to the Pilsner Fest were spectacular fashion shows of casual wear that bears the brand Pilsner Urquell and the mouth-watering delicacies that were available in the Czech Republic's largest pub – Na Spilce. At this restaurant alone, people drank six thousand pints of pilsner with their meals.

Visitors to the brewery showed unprecedented interest in the brewery tours featuring theater performances. Over the weekend, the number of visitors to the famous lager cellars totalled 4,106, of which some 1,500 came from abroad.

The atmosphere at the festival was quite calm and friendly, there were no major complications or incidents. What proved to be quite useful was a new invention – a beer wristband for young looking people of legal age which allowed them to purchase alcohol. Almost three hundred wristbands were issued to help both vendors and visitors to observe the customers' legal drinking age, which was watched especially carefully this year.

During the entire festival, a total of 450 kegs of both local brands, Pilsner Urquell and Gambrinus, were drawn.

For more information, go to www.pilsnerfest.cz, where you can also find print-ready photographs from the event.