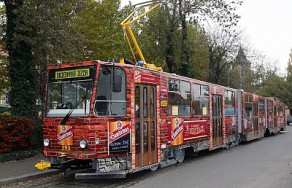 Obcanska volba, a corporate social investment programme of Plzensky Prazdroj in support of the development of those regions where its breweries are located, has been awarded a special prize in the category of “Outstanding Projects” in the contest for the 2007 TOP Corporate Philanthropist, organised by the Czech Donors Forum. Mr Mike Short, Plzensky Prazdroj's CEO, received the award from the hands of Czech Deputy Premier, Mr Alexander Vondra, at a gala session in Prague on Thursday 25 October, where the results of the prestigious ranking were announced.

A professional jury appreciated in particular Obcanska volba's transparent approach to donations by involving the general public as well as employees, and its systematic efforts aimed at the development of non-profit organisations active in the region. It makes use of a transparent system of distribution of financial funds, with the active involvement of representatives of the region who best know the municipal life and the activities of non-profit organisations. It offers the general public and its employees unmediated access to voting and thus to making decisions about the allocation of funds. The programme represents a model of inter-sectoral cooperation of the private, State, and non-profit sectors, between the general public and employees”, the Czech Donors Forum pointed out.

“It is very difficult to identify where our assistance would be most helpful. Therefore, we annually seek advice on where the funds should go from people who live in those places where our support is directed. We ask people from the Plzen, Frydek-Mistek and Velke Popovice regions exactly what projects in the areas of culture, social care, health care, environmental protection and leisure time activities would be most feasible in their opinion. Thanks to the regional dailies and other mass communication media, we can address practically everybody. Then, all that needs to be done is to cast one's vote on the Internet or to send an SMS”, says Mr Marek Hlavica, Corporate Communication Manager, Plzensky Prazdroj, who adds: “We very much appreciate our excellent cooperation with eminent personalities, who represent their cities and regions in the Obcanska volba project, joining its Council of Representatives. Also, the assistance from the appropriate regional dailies belonging to Vltava-Labe-Press, particularly in promoting the popular vote, has been of key importance for us. They, too, should be proud of the award, which comes on the occasion of Obcanska volba's 6th birthday.”

Ever since 2002, the Obcanska volba programme has extended its support to more than 150 development projects in three regions worth in total CZK 35.5 million; currently, voting of the regions' population is culminating within the fifth annual Obcanska volba project. This year, they decide about 59 projects.