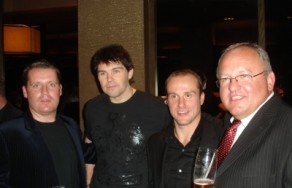 The U.S.A. is the second largest importer of the traditional Czech lager beer, which gave the world the generic name of “pils/pilsner”. Among others, famous Czech ice-hockey players based in the U.S.A are also regular consumers of this beer.

Pilsner Urquell is sold in the United States in more than 40,000 restaurants, clubs and shops, including such significant places as the Michael Jordan Restaurant, and clubs at the legendary Carnegie Hall and at Madison Square Garden, where also Jaroslav Jágr and Martin Straka, the famous Czech ice-hockey players established in the USA, come out on the ice rink to take part in the NY Rangers’ home matches. These gentlemen have also attended as viewers the finals of the contest entitled the “Pilsner Urquell Master Bartender”, one of the marketing activities in support of the PU brand in the United States.

The Pilsner Urquell brand also acts as a partner to the photography contest International Photography Awards and the subsequent gala ceremony entitled Lucie Awards, which – according to experts – is to the world of photography what the Oscars are to the film industry. The 2007 awards were announced at the Lincoln Center in New York on 15 October.

Beside the traditional marketing activities, PU also bets on expanding the popularity of its beer in the United States with the help of its ambassadors. The title of Honorary Pilsner Urquell Ambassador in the U.S.A. has been awarded, for example, to Martin Straka, the New York Rangers left wing, and to director Miloš Forman. Those people know the history and production process of the first ever pilsner-type lager in the world, as well as the manner of treatment required in order to ensure the best possible taste.

American customers mainly prefer bottled beer (71.5 percent. of all PU sold), followed by restaurants selling tap beer from kegs (24 per-cent.), while the share of canned PU beer is 4.5 percent. “We supply the U.S. market with beer in special 25 litre kegs. They are much narrower than we know them; the diameter of a mere 28 centimetres fits in the cooling space in bars at U.S. restaurants and clubs. As I was able to see during my latest trip to the United States a week ago, the smaller keg content also affects in a positive manner the tap beer’s quality“, says Mr Vaclav Berka, Trade Brewmaster of Plzensky Prazdroj.

Pilsner Urquell has been exported to the United States for more than 130 years
Imports of the Pilsner beer have a long tradition in the United States. Back in 1872, a Mr Rudolf Oelsner, from Wroclaw in then Silesia, and a customer of the Pilsen brewery, moved to New York. He decided to remain faithful to his favourite beer brand and a year later, he found his first customers for it: in November 1873, a Mr August Fischer of New York was sent 5 pails of beer (2.83hl); one month later, a Mr F. Hollender, also in New York, ordered 10 pails (5.56hl). Commencing in 1874, Mr Oelsner started to import the beer by himself and in larger quantities – in 1874, he ordered 149 pails (84.32hl). All in all, a total of 140 hectolitres were exported to the United States in the second year of the deal. The only periods when the Americans had to do without their Pilsner beer were the world wars and the prohibition. Very small quantities were also exported in the years 1949-1989 – between 187hl and 18,000hl, which equals the quantities imported in the 1880's and the 1890's. Beer exports were boosted after 1999, when Plzensky Prazdroj joined the global beer brewing Number Two, SABMiller, which supported beer sales with the help of its extensive distribution networks and marketing activities.

Facts about Pilsner Urquell in the U.S.A.