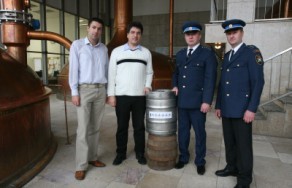 Plzensky Prazdroj appointed Jaromir Zacek (43) as Sales and Distribution Director at the beginning of December 2007.

Jaromir Zacek graduated from the University of Economics in Prague, majoring in Economics and Corporate Finance.

Before joining Plzensky Prazdroj, he held a number of trade and finance positions in the Czech beverages industry, including that of CEO of Brno-based beer & soft drinks producer, Pivovary a sodovkarny Brno, a.s.

Jaromir Zacek is married, with four children; he speaks Czech and English. His interests include sports and cinema.