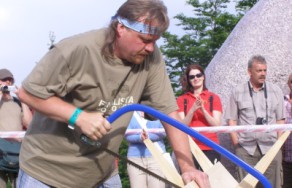 Thanks to gold bottles, Prazdroj saved 2.5 per cent of fuel in one year

In April 2007, Plzeňský Prazdroj accomplished the transition to the new Gold bottles. All Prazdroj beer labels are now sold in bottles that are one-fifth lighter compared to the previous type. Prazdroj saved over 32,000 tonnes of freight over the past 12 months although approximately the same amount of beer was sold. This saving corresponds to 1,200 heavy lorries or 3,241 haulage vehicles with a capacity of 10 tonnes.

Thanks to the new thin-walled bottles, the weight of a pallet loaded with full trays of beer was reduced by 6 per cent, saving 2.5 per cent of fuel.

“Beer is a completely natural drink. Therefore, we are also concerned about the environment. Besides feeling good, green solutions also help to save mineral resources and to cut transport costs,” says Jiří Mareček, the press spokesman of Plzeňský Prazdroj.

Because of the lower weight of the new bottles, the amount of glass sand needed for their production dropped by 5,350 tonnes compared to the “old” model. The GOLD bottles also save energy: compared to the production of the original bottles, 142 TJ* were saved thanks to the transition to the new bottles for the Prazdroj labels. Expressed in terms of electrical energy generated in a coal power plant, over 40,000 tonnes of coal and around 50,000 tonnes of carbon dioxide were saved.

In reality, the production savings have been even higher and the environmental impact lower as discarded bottles were recycled. In the past 12 months, Prazdroj has delivered 5,737 tonnes of glass to be recycled in glassworks.

*142 TJ = approximately 40,000 MWh, which corresponds to the amount of electricity consumed by around 16,000 households, i.e. a larger district town (provided electricity is not used for heating).

Along with care for water resources, industrial water purification, recycling and reduction of carbon dioxide and other emissions, energy savings and measures aimed at transport efficiency are part of the sustainable development strategy at Plzensky Prazdroj.