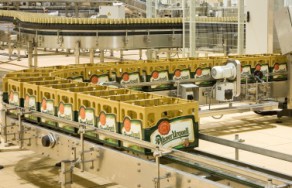 In May, Pilsner Urquell completed the expansion of the current bottling line in Pilsen. The line filled alternatively returnable bottles for the domestic market and non-returnable export bottles. Now the brewery has installed a second line with the same capacity into a new bottling plant. The bottling capacity is now doubled, reaching 120,000 bottles per hour.

Advanced technology saves water and enhances quality
The new Pilsner Urquell line, as the only one in the Czech Republic, reaches the world highest standard. State of the art technology simplifies operation and, among other things, saves water: for cleaning and washing of the same amount of bottles up to one half of the water is saved, so that for 100 returnable bottles the line needs 80 litres less water. Unlike most breweries in the Czech Republic, it uses a new flow-through pasteurisation, which is very beer-friendly and makes possible the export of the beer overseas.

140 types of labels for the whole world
The line can distinguish and process many types of packaging; currently it processes 225 types of packaging for domestic and international markets. “For example Pilsner Urquell, which is exported into more than 50 countries around the world, is supplied to the markets in 140 types of consumer packaging with the same number of labels in various languages and variations,” says Pavel Semik, the Plzensky Prazdroj Plant Manager.

More information about investment in the brewery and brand development

The main target of investments into the Pilsen brewery production capacity and taste stability is strengthening the Pilsner Urquell exports and meeting the growing global demand. Last year Prazdroj exported 846 thousand hl of beer, Pilsner Urquell's part was 675 thousand hectolitres Year on year growth was 7.7%; Prazdroj reached a record in its 165-year history.

When expanding production capacity Prazdroj invests in various parts of the production process (Pilsner Urquell brewery, fermentation, final fermentation, filtration, bottling, storage, etc.).The capacity of the Pilsen brewery will grow from the original 5,060,000 hl annually to approximately 6,160,000 hl annually. The brewery will reach this capacity already in June 2008 after the completion of the lager tanks.

In the fiscal year F08 (April 2007 – March 2008), Prazdroj invested CZK 2.77 billion in further development, which represents the second largest amount since SABMiller acquired PPAS. More than one third of this money was used to expand the production capacity of the breweries and another third was used for modernisation of packaging technologies.

Since acquiring Prazdroj, SABMiller has invested more than CZK 14 billion in the development of its brands.