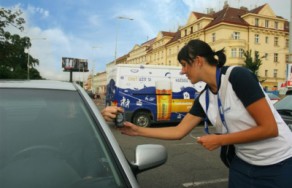 In five weeks, the company will reward drivers with 150 thousand cans of non-alcoholic beer

The ever growing number of fatal accidents on Czech roads proves that drunk driving really is a serious issue. Plzensky Prazdroj unambiguously stands for zero tolerance for alcohol and supports its position with its activities as well – during five weeks of a summer campaign in 200 places all over the Czech Republic, hostesses will hand out 150 thousand ice-cold cans of Radegast Birell non-alcoholic beer.

Radegast Birell has been organising this campaign for the third year in a row, every year it uses up ca. 2 tons of dry ice and the promotion teams cover almost 100,000 km. They come to all regions of the Czech Republic, mostly to hypermarket parking lots, but you can also meet them at music festivals (Masters of Rock), at petrol stations, on camp sites, bike paths or busy places of Czech towns and cities.

Although the consumption of non-alcoholic beer among drivers is increasing, there are still drivers who drink alcohol, albeit a small amount, before driving. “We do not see any single reason to make the law in this respect any softer,” says Marek Hlavica, communication manager at Plzensky Prazdroj. “We are convinced that our industry can also do its part in finding a solution of this social problem, and at the same time look for ways to prevent negative consequences of irresponsible drunk driving. The public should know that Prazdroj is unambiguously for a zero. Drivers should not take the responsibility for their lives and the lives of those around them easy. If you drink alcohol, do not even think of driving a motor vehicle,” emphasizes Hlavica.

Plzensky Prazdroj is the founding member of the Responsible Brewers Initiative (Iniciativa zodpovednych pivovaru), which sets rules for self-regulation of advertising for alcohol producers and initiates educational campaigns. The company itself supports the unique “Promile INFO” service providing information on the current blood alcohol level and on the time the driver can safely get behind the steering wheel.