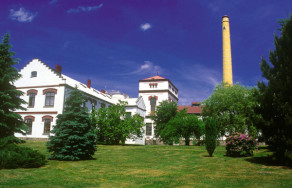 Velké Popovice brewery, a member of the Plzeňský Prazdroj group, will invest more than EUR 50 million in the development of the logistics solution and service roads within the brewery premises. The main objective of the project is to improve the traffic situation in the brewery and its surroundings, to reduce loading time and to speed up checks at the gate. Part of the investment will be earmarked for improving the green areas in the brewery and open them to the public.

As early as the end of November the original gate will be replaced with a new one, which will also have an entrance from Ringhofferova Street. Besides the new road surface, a new small roundabout will be built in the brewery. In the next phase of the project, scheduled for early next year, the brewery will build new handling and hard surfaces with an area of approximately 5,000 m2, including lighting, which will serve for storage of empty packaging and in the future as a parking lot for trucks.

The new cargo gate will be moved farther inside of the brewery. There will be 15 to 20 new parking spaces for trucks on the vacant area on the Prazdroj plot. “Trucks will no longer have to wait for loading goods before the gate, which will relieve the burden borne by the municipality,” says Jaroslav Gubiš, manager of the Velké Popovice brewery.  Truck drivers may look forward to new social amenities.

The new parking lot with over 150 spaces will double the capacity for brewery staff cars. This will partially vacate the outside car park, which can be used more by tourists and brewery guests as well as residents of and visitors to Velké Popovice.

But it will not be all just about asphalt, concrete and masonry in Popovice – an important part of the budget is intended for enhancement of 2,000 m2 of green areas. The study is being designed by Josef Souček, the landscape architect of the castle of Štiřín, who is preparing a comprehensive solution consisting of open green spaces and a small park. New pathways will be made and new greenery planted in the park. Thirty-two trees have been planted around the car parks, out of which 20 outside the brewery. The fence between the villa and the monastery will be moved, or a new fence of neat red bricks will be built closer to brewery buildings so the entire park will be open to the public.