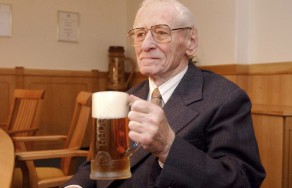 Radegast brewery manager Ivo Kaňák describes his predecessor: “Mr. Franzl, nicknamed Mr. Old, is an exceptional personality in the world of brewing and contributed enormously to the development of beer brewing in Moravia.”

Jaromír Franzl is the sixth successive chief brewer from the famous Franzl family. He went through many Moravian breweries between 1942 and 1969. In the fifties he was already making good use of his professional experience and managerial skills at the positions of assistant of production, director and chief brewer.

J. Franzl reached the pinnacle of his professional career working in the newly built Radegast brewery in Nošovice, where he worked as an assistant of production in years 1969–79. He is rightly considered the father of Radegast beer, because it was him who gave Radegast its typical taste which became very popular with time. After that he was the director of the largest brewery in Moravia until his retirement in 1981.

Jaromír Franzl worked in Radegast brewery also after 1989 as an advisor during the launch of technological innovations. The brewery received the first Golden Radegast award ever, and he was inducted into the Hall of Fame of Czech brewery and malting in 2005, thus joining ranks of the greatest figures in the field.