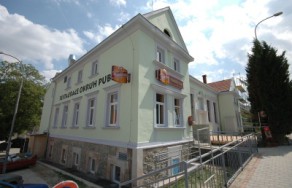 “A year ago, as a part of the Pilsner Urquell Ambassador Program, we visited the Pilsner brewery, as well as many different Czech pubs and restaurants. We liked the Pilsner Urquell Original Restaurant concept a lot, it is an amazing thing. We want to serve beer of the highest quality to our customers and guests in a pleasant authentic atmosphere, so we decided to open such an establishment here in the square in the historical center of Malmö,” say Göran Tufvesson and Johan Walterstrom, Czech Point restaurant owners.

The interior of the new Czech Point was designed by a Czech architect Jiří Hanzlík who designs and realizes PUOR restaurants in the Czech Republic from the very beginning. The restaurant holds more than 290 guests, who can also treat themselves to representative meals of the Czech cuisine, such as brewery goulash or roasted pork knuckle.

New Czech Point launch: The best Swedish bartender is a woman
During the ceremonial opening of the restaurant for about 300 guests, the final round of the “Pilsner Urquell Master Bartender” national competition was also held. Twelve selected finalists got together in Malmö to demonstrate their practical and theoretical knowledge right in Czech Point. Interestingly, the first three places were taken by women in the tight finals. The winner was Majsan Johansson, who is the best Pilsner beer bartender in Bjorn's Bar restaurant in Gothenburg.

Pilsner Urquell Original Restaurant concept
PUOR restaurants are a franchise project of Plzeňský Prazdroj – combining the best of Czech brewing tradition and Czech cuisine with the standards of modern lifestyle – to create a unique ambience with an inspiring original atmosphere. There are 16 of these restaurants in 10 Czech cities. One is also in Kiev in Ukraine.