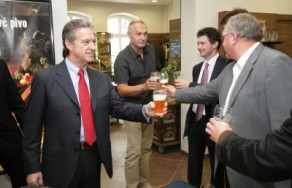 The exhibition of the brewery and its brand set right in the historical brew house will be a surprise for visitors. After starting the tour in the brewery’s park and Visitors’ Centre (with souvenir shop), people will be shown into the brew house for a historical insight. The tour will then take them to see contemporary beer-making processes as well. “We want to show our visitors as much as possible of this traditional Czech brewery, tell them the famous story of beer from Velke Popovice and bring them into the process of making its brand, Velkopopovicky Kozel” says Marketa Formanova, Tourism Development Manager in Plzensky Prazdroj.

With its well-preserved buildings, Velke Popovice ranks amongst the most interesting breweries from the architectural point of view. It is situated in the immediate vicinity of Prague, in the truly scenic landscape of the ‘Velkopopovicko’ Region.

The Velke Popovice brewery offers visitors a new tour including a new, barrier-free Visitors’ Centre. They will be ‘let under the lid’ to learn how Velkopopovicky Kozel, which comes in pale and dark variants, is brewed, and taken through the famous past and present of the successful brewery, which has been in operation for over 130 years. Naturally, tasting of the beer is included in the tour and there is also the brewery’s live mascot, a billy goat going by the name of Olda.

The brewery’s production volumes and popularity are growing

The brewery was founded in 1874 and since then, has increased its production volumes even through dramatic historical events – from the initial 18,000 hectolitres to the present output of over one and a half million hectolitres.

“Last, year, the turnout was almost 11,500 people, which was 13 % up on the previous year – the results of the first few months of this season are signalling that this year is going to be an even greater success,” says Eva Krsnakova, head of the brewery’s Visitors Centre.

Key points on the tour:

What the tour offers
First, visitors will be shown into the brand new, barrier-free Visitors‘ Centre, meet their guide and set off on the tour.

After a short introductory film, visitors will be surprised by an exhibition of the brewing process which is set in the charismatic environment of the historical brew house. An interactive installation will let them, in a stylized fashion, ‘under the lid’ of the brewing equipment and processes and present the raw materials used in making Velkopopovicky Kozel. They will be explained the difference between pale and dark beer and then have a look at the contemporary brew house.

Next, visitors will be shown into an area where the guide will introduce them to the rich history of the brewery in an innovative way. They will learn about the entrepreneurial story and the personality of the brewery’s founder, Baron Frantisek Ringhoffer, and about the various stages and milestones the brewery and its brand have gone through. Due credit is given to Baron Ringhoffer and his family, who have been essential to the evolution of the brewery as well as the broader community and landscape.

Visitors will continue to the lager cellars, where the beer ferments and matures, and then to the packaging plants where the beer is filled into bottles and kegs on fully automated lines.

The tour ends at the Visitors’ Centre again – there is a souvenir shop to browse.

A tasting of Velkopopovicky Kozel beer is included in the tour for visitors over 18 years of age. The live mascot of the brewery, the billy goat (Kozel) Olda, will also be there.

Program for the summer season

In April, the 4th march through the land of Baron Ringhoffer took place. The end of May was the second time that restaurant owners and publicans visited the brewery, being specially attended to by the Company’s Senior Trade Brewmaster and sales representatives.

This Saturday, 13th June 2009, is the 17th Kozel Day, this year featuring some of the traditional Czech crafts. Visitors, expected to amount to 13 thousand, will be able to try, for example, glass engraving, burning decorations into wooden boards, forging small items of ironwork, making a beer barrel or a wicker basket. This time again, the brewery will treat its visitors to the specialty brew “MISTR”, and there will be plenty of food to go with it. Czech music bands including both young talents and well-known names such as Anna K and MIG 21 will be performing on two stages during the Kozel event. The brewery will wind up the summer season with its Open Day on 19th September.