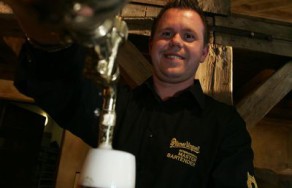 It was Pilsner beer on tap at the meeting between the Czech government and the European Commission,  during U.S. president Barack Obama’s visit to the EU Summit in Prague as well as at the fourteen informal meetings of the General Affairs and External Relations Council in Prague, Luhačovice, in Hluboká nad Vltavou, Marienbad, Litoměřice and in Brno. The Pilsner beer was present at the other 29 concurrent cultural events in the Czech Republic and in Brussels.

Renowned restaurant “Na Spilce”, operating directly on the brewery’s premises in Plzen, sent four highly trained bartenders to deliver Pilsner beer to its European consumers. “Although we had been screened for security at such events as EU and U.S. Summit in the Congress Centre in Prague, we were repeatedly and thoroughly re-checked. They also examined our traditional working gowns, and I noticed a government specialist who supervised the quality of food and drinks,” remembers bartender Miroslav Vorlík from the restaurant Na Spilce.

In the first half of 2009, Pilsner Urquell has supplied 87 hectolitres (1,913 gallons) of beer, mostly Pilsner Urquell and non-alcoholic Birell. “Politicians as well as cultural representatives of all membership countries could taste for themselves that no matter what political changes and periods, quality and taste of Pilsner Urquell remain constant. This further contributed to the good name of Czech beer,” says Luděk Kraus from Pilsner Urquell.

In the course of the Czech presidency, various beer-drinking traditions have been competing. How do beer drinkers in different countries enjoy their experience? Pilsner Urquell, the biggest Czech beer producer and exporter, has conducted surveys to provide you with the answers to this.

Although more than half of the Czechs embrace the European Union, with regard to beer they are the biggest patriots who prefer domestic brands (91 percent). Imported beer brands have a tough life in the Czech Republic, meaning that beer is a product that successfully resists the import by the virtue of its quality. Consequently, Czech beer brewers (different from Czech vine producers) need neither governmental measures nor import contingents assigned by the government. By contrast, the Swedes tend to ignore their domestic beer (preferred only by 18 percent), and the Italians are – as expected – indifferent to it (more than half of them).

The Czechs are also the most exigent consumers as far as the way of consummation goes. They are the most frequent drinkers of beer on tap (73 percent), whereas for the Rumanians the beer in the pub is only a random occurrence (13 percent of surveyed consumers). By contrast, every second Romanian (54 percent) likes bottled beer in his glass, something that only 15 percent of Czechs do. Beer from beer cans in their glasses is most enjoyed by the Swedes (19 percent), while for a Czech it is close to unimaginable (only 1 percent).

Remarkably, the second biggest beer fans – the Germans – are the most frequent drinkers from the bottle (37 percent). Similarly, the Swedes prefer drinking directly out of a beer can (16 percent). In the Czech Republic, by contrast, one could see a Czech drinking out of a bottle only in 9 percent of cases, and, in normal circumstances, almost never from a can (1 percent).

It is also interesting what role and importance beer brands have in those European countries that have a certain beer tradition rooted in their national cultures. The biggest national brand in this sense – i.e. a beer with the most fans in the country where it is produced – is the Czech Gambrinus. Every fourth beer consumed in the Czech Republic has a Gambrinus label, which translates in volume amounts to approximately 4 million hectolitres per year (87.9 million gallons). The absolute maximum of a national beer brand is consumed in Great Britain – the Carling brand scores 6.6 million hectolitres per year – nevertheless, Carling is only every tenth beer drunk in Great Britain.