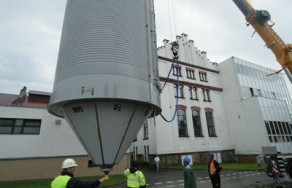 “We are not changing the traditional recipes and brewing methods, as they have been proven over the decades and are the cornerstone of our beers’ popularity. The latest technology will help our brewmasters to maintain strict taste parameters of Velkopopovický Kozel that our drinkers are used to,” says Jaroslav Gubiš, Velké Popovice brewery manager.

One section of stainless steel vats for beer specials Master 13° and 18° remains in operation in the fermentation room, and it will become a part of the visitor route. Also a small volume of Velkopopovický Kozel beer will be fermented here to ensure the sensory quality of the beer from the tanks remains the same. This is verified by tens of degustations with triangle sensory tests.

“The indisputable advantage of the CC tanks is a 100-percent sustainability of microbiological cleanness of the yeast, which always was, is, and will be a problem with the standard vats. The fermentation will of course continue to take place separately from the secondary fermentation, both in low temperatures. The length of the main fermentation remains the same. We’re not changing the fermentation process either, as we stick to the time-tested temperature of pitching and the speed of fermentation,” explains Jiří Fusek, brewery’s brewmaster.

The new CC tanks also present an ecological advantage, because they allow collection of CO2, which will lead to brewery’s self-sufficiency in its consumption. CO2 will be used during beer bottling and the brewery will save up to 4000 tons of CO2 per year. CO2 collection is already in place in Plzeňský Prazdroj breweries in Plzeň and Nošovice; the Popovice brewery will however receive the most modern and most economical system currently on the market.