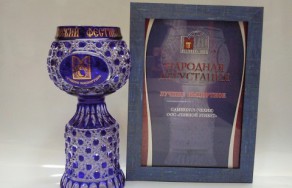 This year marked a festival record in the number of beers submitted. There were some 160 brands of beer available for tasting produced by both local and international brewers. Visitors were able to taste Czech beer thanks to the company Interportfolio, which currently exclusively imports three European brands in Russia: Duckstein of Germany, Gambrinus and Tatranský Zámok of the Czech Republic.

The Gambrinus brand caused huge excitement. Russian beer lovers praised it for its excellent taste and awarded it the title of the best beer at the festival.

“It really is an honorary award for us because it has been awarded by real beer lovers. They are people who come to relax here and discover new beers”, said Ms Yekaterina Smolkova, the Gambrinus brand manager in Russia.

“We support the Gambrinus brand in Russia and we recognise its big potential. We were able to introduce it to retail chains and commenced cooperation with a network of branded pubs and restaurants in Moscow over a short period of time. Now, we plan to launch an interactive web site and a lot more in the future”, says Interportfolio’s PR manager, Mr Ilya Bereznyuk, and he adds: “Gambrinus offers a genuine ‘Czech taste’, therefore I was not so surprised that it won the honorary title.”

An indicative list of international beer brands taking part in the festival: