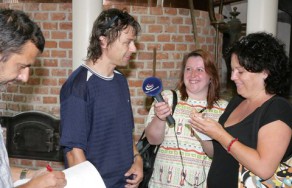 This year’s one-hundred thousandth visitor walked through the historical gate of Plzensky Prazdroj on 5 August.

The jubilee visitor, Miroslav Charvát (39) of Čestice in the Hradec Králové region, received a CZK 1,000 voucher for the purchase of souvenirs of his own choice in the Pilsner Urquell gift shop, and a five-litre keg of Pilsner Urquell beer. Unlike other tourist destinations which are seeing a drop in visitor numbers due to the economic downturn, the most famous Czech brewery has been almost untouched by this trend, thanks to its diverse range of programmes and attractive tours. “The only change compared to the past is in the mix of nationalities. Czechs and Germans have held first and second place among visitors to the brewery, but Russians in third place have been outnumbered by visitors from Taiwan – there were 4,247 Taiwanese in the first seven months of this year alone. Most of the people, 67 %, toured the brewery, 23 % saw the Brewery Museum, and 10 % visited the city’s Historical Underground, only recently opened to the public, via the entrance in the Brewery Museum’s basement,” says Tomas Raboch, Tourists Services Manager of Plzensky Prazdroj.

In tourism, the effects and consequences of the economic crisis are now frequently discussed. The statistics of the attendance of Plzensky Prazdroj brewery tours show some interesting facts in this regard: “There was a drop in visitor numbers in the first three months of this year, which we believe is a consequence of the economic crisis but also of very cold weather, which does not favour tourist visits. But we’ve been doing well again since April. Given the general decline in tourism, we’re happy to see the difference in attendance against last year decreasing – in the last few months, we’ve even exceeded last year’s record figures. Besides the varied offer and high-quality services, this achievement is also due to a new tour, featuring the Pilsen Historical Underground,” explains Tomas Raboch.

Traditionally, the structure of visitors changes with the coming of holidays in the summer months. Whereas June is the month in which visits by organised groups reach its peak (this year making up 70.5 % of total attendance), there are more individuals visiting the brewery in July (60%) and August.