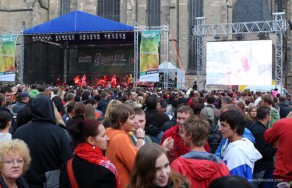 Pilsner Fest 2009 was opened on Republic Square by the popular band Monkey Business, followed by the Mayor and Deputy Mayor of the City of Pilsen, Pavel Rödl and Marcela Krejsová, who came to take part in a festive toast on behalf of the Pilsen City Hall, the event’s co-sponsor. The brewery was represented by the brewmasters Václav Berka and Jan Hlaváček, who were joined in the nice round 140th anniversary toast by the famous native of Pilsen, actor Jiří Suchý. More than three thousand people took part in the mass toast. Next on the program was the performance by Dan Bárta and Illustratosphere. Dan Bárta played an important role once more on Friday night when for the first time he introduced an anthem he had composed for the City of Pilsen on the occasion of its candidacy for the European Capital of Culture 2015. After his concert, there was a procession to the brewery.

The music program continued with more interesting musicians and musical groups. On Friday night, the bands Turbo and The Backwards performed. On three stages, two in the brewery and one in Štrunc Park, Saturday saw excellent performances by Yvonne Sanchez and Samba Show, The Neoromantix – winners of last year’s top MP3 chart, Buty and Mňága a Žďorp.

The celebration of Pilsner beers welcomed the Czech winners of the Master Bartender competition, who instructed visitors on how to draw beer properly. The fact that the bartenders’ stand was constantly surrounded by a multitude of people merely proved their presence was a welcome attraction at the festival. For the first time ever, Gambrinus brewmasters offered visitors the chance to taste this most popular Czech beer unfiltered.

Gambrinus and fans of the national soccer team
In the roofed area of the historical loading platform, from which in the past beer used to be dispatched to the whole world, people could root for the Czech national soccer team in the qualifying match against Slovakia. Legendary international soccer players helped create a special atmosphere; Antonín Panenka was interviewed during live broadcasts by Czech Television, supported by fans in the brewery chanting his name. Soccer enthusiasts also expressed their support for the national team on a jumbo-sized tab, which gradually filled with marks and ascended one of the brewery chimneys.

The weather
If there was something which did little to help Pilsner Fest, it was the weather. On the first day, organizers even had to interrupt the festival because of the forecasted gale-force winds that were approaching Pilsen. The organizers handled this situation well and people left the brewery calmly and without any incidents. The strong wind, which damaged some constructions overnight, only confirmed it was a good decision.
“We really put a lot effort into this year’s program and we are pleased to say that we managed to beat the weather. We would like to thank everyone who visited Pilsner Fest. We believe we managed to offer visitors quality entertainment and a friendly atmosphere in the brewery, as becoming of beer,” comments Karel Kraus, who is responsible for marketing the Pilsner Urquell brand.

Fireworks
On Saturday, at exactly half past nine in the evening, a splendid fireworks display was set off from the roof of the Angelo Hotel across the street from the brewery, so all the visitors could enjoy the spectacular show.

Tours of the brewery and the Brewery Museum
More than 1,700 people took advantage of the chance to take the brewery tour, which was enhanced by the coopers’ workshop during the festival. Other attractions for visitors included the Pilsen Historical Underground and the Brewery Museum, which offered theatre skits and the mysterious Master beer ritual. More than nine hundred people took up the chance to get acquainted with the history of the brewery.

Promile.INFO
As part of the responsible alcohol consumption campaign, the Sananim non-profit organization, operator of the Promile.INFO service, was also present at Pilsner Fest. People who drank alcohol could use Promile.INFO to find out when they would be able to drive again. In addition to this service, Sananim staff also had breathalyzers available to anyone who wanted to check whether they had sobered up enough to be able to drive again.

For more information on Pilsner Fest, including a photo gallery, visit www.pilsnerfest.cz .