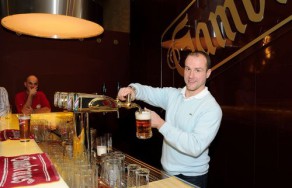 Two ice-hockey teams, HC Plzen 1929, and FC Viktoria Plzen, headed by captains Martin Straka, and Pavel Horváth respectively, were the first guests of the Gambrinus Brewery’s new Visitor Centre. In the course of the event, which was designed specifically for the outspoken devotees of Gambrinus beer, the teams relied on their training, natural abilities and beer knowledge in order to compete for the “ŠtamGast” title. In doing so, the facilities served as a training centre where the athletes were challenged to distinguish between samples of 10, 11 and 12-degree beer and to also compete in their respective teams while they learned how to properly tap the beer. Finally, a visit of the brewery’s production facilities, including the boiling plant and the yeast unit, rounded out the event.

The Gambrinus’ Training Centre is the first stop on the new sightseeing tour. It was built on the site of the original 1870 boiling plant. “In spite of the volume and the exigency of the task, the reconstruction was completed in an extremely short amount of time. Within two months, we’d finished everything. We approached the reworking of the site with sensitivity, always bearing in mind the value of the building’s heritage. This prompted us to re-use original tiling and windows, as well as other historically compatible materials throughout the rest of the building. We constructed new ceilings and a full-range of social amenities. One novelty is a window through which visitors can look directly into the boiling plant,” says Tomáš Raboch, manager for Tourism Services in Pilsner Urquell.

This stop on the new sightseeing route has thus far only been accessible to exclusive groups and their bar keepers. In the coming months, regular visitors will be able to tour this section of the sightseeing route. The official opening of the completed route is planned for the summer of 2010. “Our aim is not only to introduce our visitors to the rich history of the Gambrinus brand, but to also have them enjoy the Gambrinus inherence – fun and friends,” adds Jiří Rákosník, Gambrinus Brand Manager.