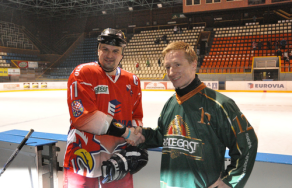 “I am sure that my teammates would love to see me work hard at the brewery. But I am sure that if we go to the finals of the first-league playoffs, it will be a bigger adventure for all of us,” says Olomouc hockey team Captain Richard Brančík. If he loses the wager, he hopes that at the brewery he will be given something interesting to do. “Maybe I would be good as a taster, I certainly know good beer,” added Richard Brančík with a smile.

Radegast representative Petr Kouble is not worried about the work that waits for him if he loses. Although he admits that there might be slight complications: “I will be fine with cleaning the locker room, but I presume that the players will make it more interesting for me. When it comes to taking care of players’ needs, I am sure that a professional from the Olomouc team, Petr Přecechtěl, will help me out.”