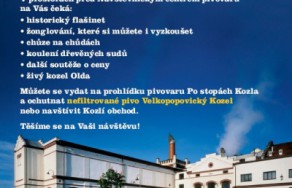 “This year it is all about the 40th anniversary and its celebration, in which we would very much like to have our customers participate,” says Pavel Kmínek, Radegast brand manager.

Deep in the summer those who love challenges will set off from the statue of Radegast on a 25-mile long trans-Beskyd hike that will end in the Radegast brewery. This should really challenge their physical condition and prepare them for the main event – the Radegast Day in Nošovice, on Saturday, 11th September.

“This year, Radegast Day will be fully dedicated to our anniversary. It will also see the opening of the new Visitor Centre, and certainly, on that occasion, we will not miss the traditional yeast lager Radhost,” added Pavel Kmínek. The Visitor Centre will show the brewery’s history in pictures and historical artefacts. A movie theatre and a souvenir shop carrying a  wide range of items from the Radegast collection will round out visitors’ experience.

Another plan involves a reunion of those who remember the brewery’s foundation. Many may have valuable materials and information about its history. One who is certain to be remembered is the father of Radegast beer and one of the biggest figures of Moravian beer brewing, Mr. Jaromír Franzl.

On the exact date of the anniversary, 3rd September 2010, an anniversary Radegast barrel will be drawn. But Pavel Kmínek did not want to share details: “Exactly what it will look like remains secret for now. It should be a surprise for everybody.”