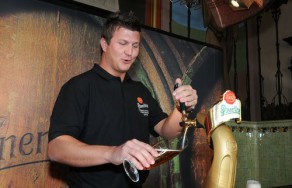 „Our goal at the Day with Brewer is to show innkeepers and restaurant-goers that we brew beer from the best raw materials according to the traditional recipes designed for the brewery by its first brewer, Mr. Franzl. We also teach them how to take care of beer in the restaurant or pub in order to keep its excellent taste,“ specified the Radegast commercial brewer Zdeněk Baszczynski on the objective of the event.

Day with Brewer is very much loaded with activity. When the inn owner/keeper arrives at the brewery with his colleagues and guests, they take part in a four–hour session on the history of brewing, the raw materials and beer brewing procedures. The Radegast brewery commercial brewer leads the session. After that, they set off for an extended brewery viewing and try their luck as tasters. An important part of the programme covers information on quality beer care in restaurants and proper draughting.

Most of the participants leave the brewery after Day with Brewer with a certificate that attests to their successful completion of the final test.